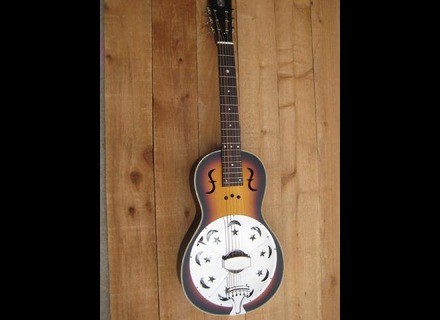 Republic Miniolian
5
The fine is from Texas, designed by the head of Republic Guitars, but it is obviously in China that the parts are manufactured and assembled. No problem on that side. It's a little "cheap" when the fate of the packet, you would think a toy. But the job is done seriously, the finishes are quite acceptable. Two caveats: the headstock is dug sufficiently so that the low E string touches the wood (it has no effect on either the sound or the playability), and the fret board hung a little when I received it). Headstock "slotted" in the manner of classical guitars, with a very pronounced V-shape, a logo "décalco" Republic, the mechanical rollers vintage look a little cheap too, but doing the job. Mahogany neck, rosewood fingerboard with markers of star-shaped button. Bone nut at the top of the handle, the width of which is quite substantial, 46.5 mm, with a good gauge of string. Body rosewood veneer, spruce plywood (veneer does not matter on a reso, one account the quality of the cone), with a beautiful sunburst matte and two vents in F, which make their effect. The curves of the instrument are those of a parlor, a small, feminine, love me, but you must love. The pitch is 63 mm, slightly reduced compared to normal standards, which apparently has an influence on the sound, but I think it's rather touching that it plays. The cone is a Continental 9 inches (much better than what is found automatically on most entry-level reso). The system is called a "cookie" is a cake of maple laid on top of the cone and transmits the vibrations of the strings, creating what his inimitable, and amplifying considerably passage.Un metal tailpiece provides tension strings, and a beautiful trim covers everything. Several patterns are available from Republic guitars when you order, just choose. Personally I chose the model "moon and stars," and I do not regret (my nickname Cyrano is not for nothing).

The action is high enough, the handle off, but the guitar is comfortable. I recommend the lowering of a tone or a semitone, which will keep pulling hard enough keeping comfort. Ergonomics is that of a parlor, then put the guitar between his knees allows for a more comfortable gaming Weight is not too complex, it is not an all-metal model. The action set fairly high ex delivery allows a game to slide and fingers. The handle is not a highway, but it allows a particular game, and the left hand does not tire. the spacing of the strings helps the game to the fingers, with or without tabs.

The sound is ... incredible for the price. Warm, full, cutting with the grain fabulous, capable of great nuance. A little banjo, a little guitar, ideal for blues, bluegrass, folk.Son more focused medium, but the grain really very pleasant. Its volume is important, and must control his game when playing with others, under threat of drowning everyone. In slide is a killing. All.

I have a few months. I tested it at home alone, in groups with a friend, and in concert. it had its effect everywhere it goes. First, because his appearance throws: it is really beautiful, with its trim and sunburst table, and also because the sound to match. I paid about 450 euros, including shipping (and taxes as well). Purchased directly from the site of Republic Guitars Sunday, she was in my living room on Thursday, with the icing on the cake, a very nice hard case padded faux fur and faux leather on top, but strong and class. And that sound! This sound! Highly addictive, if you love blues, bluegrass, or attracted by the lunar flights of Ry Cooder.

See all 11 photos of Republic Miniolian »