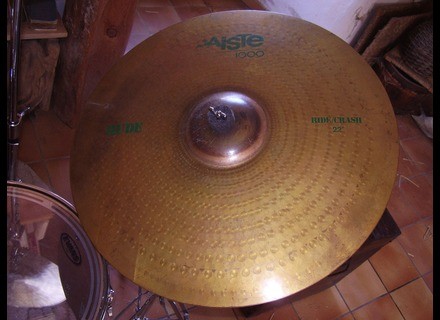 Castle drummer's review (This content has been automatically translated from French)

Paiste 1000 Rude Ride/Crash 22"
4
The crash / ride 22 "(plutt ride that crash) is pretty cool, I play a few styles of" rock-jazz "with, it sounds pretty cool, and is less intrusive than the paiste 101 brass, it has sound much clearer, more honest.
I bought it used 80 euros a few days ago, which is not expensive and is in good condition.

I think it is good for a drummer at any level and any style whether it is, because if you want a ride like me really jazz, one that I liked cost 300 euros new, so I intend to keep my rugged good time and has better sound than the ride cymbal sabian B8 and etc. I think.
It is quite versatile and can be used in a lot of DIFFERENT styles.
Did you find this review helpful?yesno
»