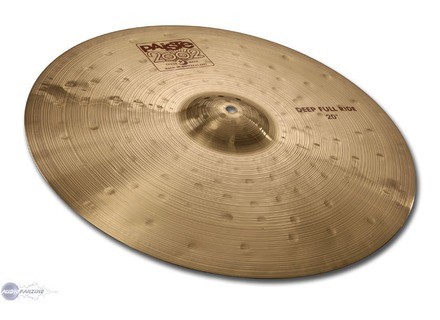 Paiste 2002 Deep Full Ride 22''
5
I owned my 2002 22&quot; ride for a few years before sadly parting with it. I had it paired with an 18&quot; crash from the 2002 series, and they were a match made in heaven, though I wished I could have had a 20&quot; crash to fill it out. Paiste makes awesome cymbals, and they really shine when you get up into bigger sizes like 18&quot;-20&quot; crashes and 22&quot; rides.
Some things I liked about my 22&quot; ride were:
1) The 2002's durable finish. Fingerprint, smudges, hand oils.... never hurt the finish on this cymbal even when I was constantly setting up and breaking down without wiping the cymbals down. I can't say the same thing for the finish on a Sabian AAX crash I owned previously, which actually hurt the sound in time for that cymbal.
2) The fullness of sound- it is a thick ride, and you can get a great ping from it but theres always a moderate wash underneath the ping depending on your technique. I played further out on the edge and got a lot of volume from the wash (for a &quot;large&quot; sound) while still having articulation of the stick on metal cutting through the band. It was a perfect balance.
3) You can actually crash this cymbal! Even as thick as it is, with proper technique you can ride it like a crash and get a beautiful LOUD wash. I employed this alot for the indie rock band I played in.
4) Its durability. I played this cymbal heavily for a few years, never had a dent, ding, scratch, or crack. Even when playing on the edge a lot, it stood up to it. Paiste makes quality cymbals.

Things I don't like:
1) It is heavy. Not a huge deal, but due to its 22&quot; diameter and thickness you have to be careful when putting it away. If you dropped it it would break a toe for sure.

2) The bell is a little harsh, or hard to find the sweet spot since its a bit small. If you are one of those ride-the-bell-of-the-cymbal on the chorus of the song kinda guys you might feel disapointed. I'm more of a play-it-in-the-fied kind of guy who likes moderate wash underneath a subtle ping. So it didn't bother me.

If I had to buy all new cymbals over again, I would definitely look at the 2002 line, and consider the Signature series if my $$ allowed it since I'm not playing as heavy of music as I was then. The 2002's were great for my band but were a bit much when I filled in for a church band once. The 2002's cut through and are LOUD, even though retain more sensitivity and musicality than something like the RUDE series which are aptly named.
Did you find this review helpful?yesno
»