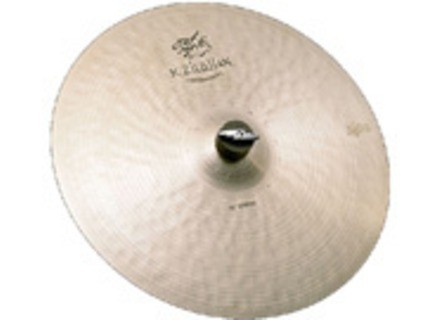 Zildjian K Constantinople Medium 22"
5
This cymbal is a marvel.
Harmonics are spellbinding. The object is cheap: 500 euro new for France (in 2010). Obviously the K Constantinople is made as the old series Zildjian Turkey in the first half of the 20th century. According to the official website, the Turkish K reappeared in the 50/60 's. They are turned by hand crafted using the tools of yesteryear. To touch one can feel the difference. Maybe fragile ...
The alloy is the famous B20. The medium 22 "is rather thin (literally and figuratively). The dome is not very great, the sound is warm, between low and midrange. The definition of the wand is simply magnificent dry to begin with, but with all harmonics of the rest of the surface, in a report-resonances very balanced attack and bewitching. It is his greatest asset in my opinion. The sound is full and broad. The volume is not huge, more jazz, but rock or other post-rock is suitable. To shine metal, it is better to see other models. The cymbal is sensitive and responds faithfully to all approaches. It can zoom, tingling or shivering as strikes. The Sustain is not too long. A gem that works very well structured as in crash. I tested three midrange models 22 "shop and they really had a difference of pitch, the rest was pretty similar ... captivating. The Bounce (among others) is also very attractive ... exquisite and beautiful. Wishing you much pleasure.