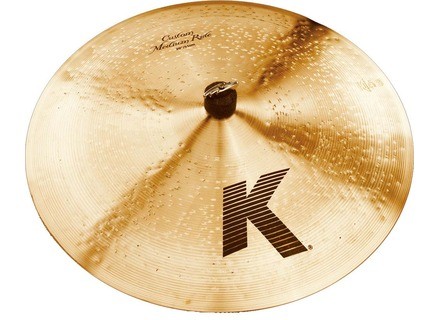 Aesthetics-wise, the K Custom Medium is an attractive-looking ride cymbal. It features a traditional-finished lathed top with hammer marks – a distinct feature among K Custom models. Its underside, however, features an unlathed brilliant finish. Viewing this cymbal from underneath, one might think that this is Zildjian’s classic and heavier sibling, the K Custom Ride. But its top surface is the difference maker, in terms of looks and sound.

My 20” K Custom Medium Ride is almost 2 decades old (based on the serial number engraving on the cymbal). It still sounds sweet, slightly mellowing as it ages. Despite my ride already having a hairline crack (no thanks to my occasional crash-riding), it still sounds beautiful. There’s magic in that K Custom sound.

There are drummers who like collecting several ride cymbals for various musical styles and applications. But if you need to have just one ride that can do everything for you, the Zildjian K Custom Medium Ride is a must-have equipment. Its sound easily fits various musical applications, and it’s an excellent choice for recording and live situations. I would highly recommend it to drummers who want a very versatile ride cymbal with a warm and defined sound.

esprit frappeur's review (This content has been automatically translated from French)

Zildjian K Custom Medium Ride 20"
4
I have the cymbals for a few months déjàs and I am very happy.
I chose this cymbal for its lack of personality just because I wanted a cymbal happening everywhere. After having long been on a ride very thick, I wanted a model medium to switch styles (rock / pop / funk / fusion).
The table is set with little break and warm your ears. The Bell is not too powerful but still allows same to be heard.

It will do wonders for the Jazz / Fusion Jazz rather than the traditional because it lacks a bit of heat.

I hesitated a lot between the cymbal and the aged pre-K Light Ride, precisely because it offered more heat with a ping as well defined. But finally I got a good deal on the medium and I do not regret it.

Again, it is quite expensive especially compared to Istanbul / Bosphorus who make exceptional wrinkle less.
Did you find this review helpful?yesno
»