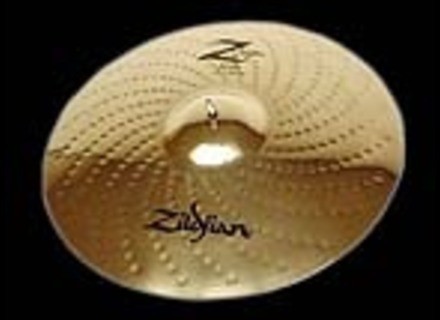 lord stolas's review (This content has been automatically translated from French)

Zildjian Z Custom Power Ride 20''
2
How long have you use it?

A little over a year.

I have the former MODEL (Z normal): p. .. Frankly I would not recommend this cymbal (I was like most of my cymbals buying my drumkit.)

It has a nice sound but the problem is that the sound level is really low.

The ping is prcis but you really buggers to get out of the noise level drinking, the worse it is the bell asser impressive, yet it rev hard to get out an audible sound.

I RPET but the noise level is really low and then sustain trs is rapidly invading (more bizzare is long even if you hit you do not hear the ping sustain ramping c ' is expolentiel.).

It's a cymbal trs Paisse I think that's what it does not Ragit normment.
May be it's just that it has lost its EHJV over time (the guy that I buy him for a while).

a nice but not over his head or even a microphone to sing in tears over it's hard to hear for a repeat.

No. In the era or I acquired, I do not m'interressait stuff, but now with the exprience I can judge it really low quality.
I will not be long before I busted a mega bell ride AAmeinl 22 "instead.

Well I do not know what is the cust 'but I never put 250 euro in this ride.

Exprience with, you will do again this choice? ...

No, never in life!

I put him four for the sound that is rather enjoyable.
Did you find this review helpful?yesno
»

eindrummer's review (This content has been automatically translated from French)

Zildjian Z Custom Power Ride 20''
4
I use it for exactly one year and I am quite pleased.
Let me explain: I possde the normal version of this ride and I think the ping of the bell is very bright and a nice sound trs. Same with the flat of the cymbal, if you have good sticks it sounds great.

However, I really need to glimpse bourrines for sound and this cymbal is not audible in RPET trs. However, know when to hit (and then be hit when it's not even a cymbal ... pd) is a good cymbal sounds trs even when a lot (a Judging on my vidos o concert can be heard clearly trs).

I have tried many MODEL but before that I was looking for the one with the clearest ping (I t surprised that c'tait a custom z) and I did not attention has power. But I admit that this is not the most audible cymbal that I exist. I put 7 out of 10 because this cymbal is when even the very good quality but it lacks a potato to Z.
Did you find this review helpful?yesno
»