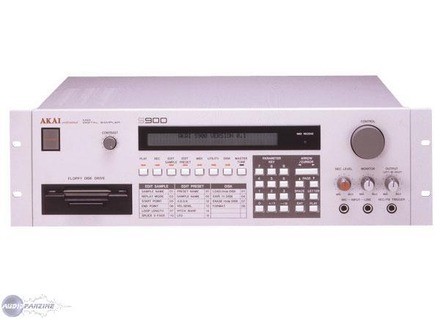 All user reviews for the Akai Professional S900

Akai Professional S900
3
It was made back in the 80's , so the features it comes with are taken into consideration. The lack of upgrading memory or adding an scsi adapter really stumps this hardware sampler. These two features mentioned were options in the later s950 model.

I bought the s900 off of Ebay for $110- $20 for shipping, so I figured it would be a good deal for an alternative to the two other samplers that I own; ASR-X Pro and MPC 60. Both have their own unique sound but wasn't lo fi enough for me. Yes, I can dirty up my samples and do, but I just an equipment freak! I read up on some old 12 bit samplers that would be able to lower the hz rating within the machine. The s900 and MPC 60 share the same sound engine, but Roger Linn modified how an incoming sample would be introduced changing the outcome (output) of the sample, thus creating a different distinct sound from the same sound engine in the s900. I figured I could have the option of lowering the hz from 16khz to 1khz.. I thought, well the sp1200 runs at 12 bits - 22khz; I believe; so running a sample at lower than 22khz would really make my beats sound grimmy. Well, the outcome was somewhat of a disappointment. I wasn't expecting the s900 to turn circles, but I was a bit surprise at how un lo fi my kick or snare sounded. It came out muffled at 10khz, but I couldn't hear a difference, other than the high's being cut a bit and a hissing sound that sounded more like a tire going flat than crunching corn flakes (if that makes sense). Anyways, the sound came out sterile and a bit cold. I figured I would throw it through some filter and effects to take bring some of the &quot;flat tire&quot; sound down.

I am still keeping. I haven't had much time to get in depth with this machine, do to all of the scrolling up and down, I would just stick to my computer audio editor for that. The sound it a bit lacking and if I needed the money, this would be the first item in my studio that I would sell. I would keep my Yamaha DJX over this sampler.

Ergonomics was tops at the time, but now it's slow and tedious!

The "illustrious", yeah ... It was the grain of old samplers, but honestly there is plétore of such sounds in banks including FREE! (In SF2, for example!)

The sounds are completely overwhelmed today to be honest!

Akai Professional S900
5
8 Original Release, trs trs strong and handsome plutt the S900 is not it?

there is an option suplmentaire 8 outputs (incredible is not it?)
oh yeah that adj used this version modified by Tom Oberheim 16bit, I'm curious.

The use is very simple as all akai in gnrale!

Incredible level of output and good dynamic trs (like S950) nothing to do with the s1000 and after!
the filter is effective trs but not available on the envelope, it is an option only OS on disk trs rare!

Some find Exceeds the use of their sampler! they are right in their views.

I prfre far the S950 but the very sound of this sche is 12 bit linear trs INTERESTED, I recommend it to anyone who wants to goter 12 bit on the cheap before to sell its MPC2000 ah ah ah! ! !

srieux not keep your MPC2000, the sequencer is not bad, but the cow what it is expensive for a simple sequencer!