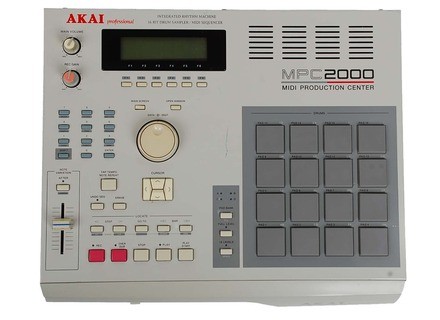 MPC2000, Sampling Sequencer from Akai Professional in the MPC series.

Akai Professional MPC2000
5
Classic unit, one of the original MPC's to hit the market. I have been using this model for ever it seems. I recommend purchasing this now because you can get them used at a great price!

Akai Professional MPC2000
5
Absolutely, the mpc2000 is the brain of my entire hardware based studio. It has generally been problem free besides the bad lcd screens that akai had built the initial models with that they replaced free of charge. I'm kinda pissed that akai will intentionally hold features and build an entirely new machine (mpc200xl) with those features. But my beef is with akai the company and not the mpc2000, that's my baby.

The mpc2000 is a breeze to learn, the manual is good but just using the machine is the best tutorial. If you make a mistake you can always use the undo button which has multiple levels of undo.

Absolutely, the mpc2000 is like an old steam engine, as long as you give it it's power source it will operate for you just as well as last time you turned it on.

I think the sound's okay, i've always had issues with the way certain sounds come out at low volumes, certain ambient sounds I have tend to sound hollow. Basically you have to be mindfull of your sound sources cuz the mpc2000 will definitely not color the sound favorably if the sound was iffy to start with. I would like it if the mpc series would have a compression feature that would give extra punch to its drum sounds.....god! would I love that!

*Sigh*, my mpc has been with me through 4-5 different girlfriends and the mpc is still with me. I've had rough times and then sat down in front of her and made music that really recharged me just listening to it and knowing that I made that on my mpc, just me and her. She's a good machine to have,...definitely

Akai Professional MPC2000
5
Akai mpc2000xl full of features. It's a midi monster and can control several pieces of gear. The sampler is sketchy. I would refer to it more as a drum sampler more than a fully functional sampler; which it isn't. Use to sequence everything else you have. It can handle it. It's really missing more filters. Timestretching could be better but I primarily use my unit as a drum machine and sequencer. I leave the sound manipulation to my other pieces of gear.

I wouldn't suggest this as a first drum machine. If you lack some background knowledge on how to use a drum machine, it's gonna be a tough road for you for a few months. It has a steep learning curve at first. After a while it should come easy though. The manual pretty much sucks overall. Again it makes no sense unless you have atleast a little background knowledge, and even then it still sucks.

I have had my MPC for almost 2 years. I have personally had very little problem with my unit. It has locked up on me before. Probably about 3 or 4 times since I've had it. If you view the unit as you would a computer and save as you go along, it should never pose a problem for you.

Drums cut through your mix with clarity. It's well known and admitted that the MPC's create some of the best sounding drums in the industry. Only maybe an SP1200 would compete with it. MPC's are the industry standard

The only way I would trade this unit is if I get an MPC4000. I move forward. Never backwards, ya know?

Akai Professional MPC2000
5
This is great for drums! It would be nice to get the FX board standard for the money spent.

Right outta the box you can lay down drum tracks. Its got a lot of hidden features not covered in the manual- so it takes a while to master.

Perfect for gigging. Adds live feel to a show.

Excellent sound and sampling engine. Pro quality all the way.

This is a great machine for making beats. Get this and a synth or sampler and you're good to go!

Originally posted on FutureProducers.com
Posted by: Unknown (January 0-, 2002)
Did you find this review helpful?yesno
»
Read the 23 user reviews on the Akai Professional MPC2000 »