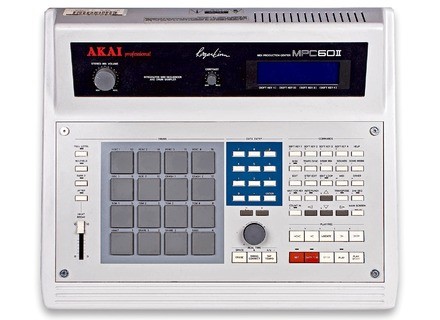 stateofmind's review (This content has been automatically translated from French)

Akai Professional MPC60 MkII
5
CHARACTERISTICS compltes, full compatibility with professional studio environment!
Sync: all it can be hassle free drive as a slave by any magnto and sync
PM: trs complete and easy to use especially for selecting a channel to a track from a sequencer, its 2midi 4 midi IN and OUT vritable make it the nerve center of your home studio, you can drive samplers, synths, programming changes peripherals, mute automation etc etc etc.. . .
audio outputs: the 8 outputs are traditional SERIES, BRAVO! it possde an internal mixer which acts on the stereo output!
sequencer: complete and simple, very practical and quick to capture as much time as rl programming step by step: probably the best hardware sequencer version 3.1 of the market (prsentation MPC3000) adds some new features but everything is in the Submitted dj version 2.12 original!

the soft 3.1 and SCSI
is an option to upgrade in the MPC60 MPC3000 while keeping the sampling and 12bit mono! dvellopp widely in forums of this site, all the new features are also here http://www.rogerlinndesign.com/products/mpc60.shtml Retailer
WARNING: you lose some functions from the soft INTERESTED original function as a tune drums, sampler or the fact of the pads directly without affecting the samples in one program!

Difference I MPC60 / MPC60 II:
trs little the Difference, a headphone output (useful power to refine the respondent in!) and a new look for the version II, a swivel screen for the version I!
While the plastic housing is fragile on the II, but weight gain!
both versions are all beautiful fawn and equivalents, it is the same, same sound, same CHARACTERISTICS! ! !

Designed to perfectly programmed beats of all kinds thanks to legendary pads akai, dj Submitted on Version I, the strength of the MPC60 RSID probably in concept while Intgr sequencer + + sampling pads!
many features that make sampler, and edit sounds dcouper rhythm rl is a pleasure, and is no longer possible on a conventional sampler when it is taste.
I know no drum machine can compete with it, except possibly be the MPC3000!

I have not stopped using it since its purchase! this machine can do without the atari cubase and other anti-pc cratif, it is as I said dj the nerve center of my setup.
used by many artists, she became the star of the flight is MPC3000 16bit and stereo!
the choice of one and another and a more artistic direction I think, as both machines are of the same caliber!
my preferences goes to the MPC60's sound 12bit edition and functions of basic and efficient trs (attack and decay), which essentially allows you to go when creating!

loudj's review (This content has been automatically translated from French)

Akai Professional MPC60 MkII
5
When I got home and my father told me "have you received your parcel with the states!"
J&#39;monte in my room, and there was ..... she is lying on my bed, olalala, I already had a 2000 but quickly dropped there ..., 2fois bigger and heavier!
And then the face she had!
She and 3000, they really Tronches of crazy!
Declads it had landed on my desk!
I almost had trouble falling asleep the first night!
J&#39;me lifted j&#39;la matted, Ouch Ouch Ouch as Primo and Mister J (True know ...!)
Good if not frankly level characteristics, I know very little!
12bit mono sampling
Midi connector in midi out MIDI Through
8 outputs separated
24s or 26 seconds of memory!
No effect or filter (but do not buy it for that!)

It must be said before, I was a dun with Reason and Sound Forge to sample!
And one day I had enough and BING, I spend about 60!!
The phrase "Back to the Old School" makes sense!
The loading time is super long, formatting a ZIP drops! The machine you note "10min "!!!! For real! You got the time to go for a ride ...
Sampling in the ear! More waveform that you can enlarge I do not know how many times in Sound Forge!
Finished on: "I sample everything and anything in the disc, and I&#39;d sort later in Reason!" Ah nan nigga, that there are 24s of sampling, so when did you put your elements of rhythmic, well you interest to select which t&#39;interresse in the disk!
And unlike a MPC 2000, you&#39;re not the preview of what you LOAD! And frankly it&#39;s a little detail about its importance! Csurtout in the selection of Drums ...
Short for a guy who goes from Reason to the 60, is a big step backwards!
It&#39;s like to start writing with his left hand overnight!
But you join in gradually, and especially you because you there!
You learn to be more accurate in the cuts, more energy efficient!
You heal your groove!
You cling to details that you do not cling before!
And it becomes a true kiff!
And then she does ergonomics phew!
Just cook the bar is really well thought out! Not con Roger!
And then when you were in the hands ouhhh a 60 ... it&#39;s hard to iron on a 2000 ...
Really ...

So the famous 12bit sound!
I&#39;m from the same school as 9th Wonder!
So I sample disk, and I cradossais with old effects in Reason!
And the first time I sample something in the 60 ... (good to know there are tweaks to do) so I sample quickly without bothering to settle the mess!
I listen ...
And there j&#39;me said "Damn she farted ..."
Must also know that she had crossed the Atlantic, imagine the anguish ...
So the first time I sample, the shock!
Even the rhythmic, everything was scarred!
You make me say "Fuck his mother, I&#39;m going to bed and we&#39;ll see tomorrow!"
And it&#39;s always like that, you get used to, you understand the machine (and that&#39;s not the most complicated to understand, When I see this fucking ASR10)
You rule it when you sample .... and frankly it&#39;s clear she has a crazy sound!
The sound is dense, loaded ... The beat is hommogène!
If his love for the Wu Tang, it kills!
If you&#39;re more Lil Jon, forget it!
But you really be objective, she can not do everything!
It is not effective on all the sounds!
Once I listen to a disc, I came across a drum break with a low oppressive!
I live sample, listen, and then ... disappointment!
On samples of brass to Ronnie Laws, OK!
It&#39;s really not good at all!
SO? Bah, you must have another sampler next!

BUT NOT ON THE LONG DID! AND WE LEARN A LOT!