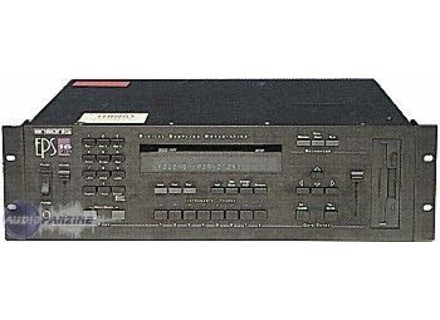 EPS16 Plus Rack, Sampler from Ensoniq.

All user reviews for the Ensoniq EPS16 Plus Rack

Ensoniq EPS16 Plus Rack
5
ensoniq certainly is to this day the most emblematic audio brand for the "American sound". The company managed to create customer loyalty from many musicians and sound lovers through offering highly musical pieces of hardware for a very democratic price.

The EPS 16+ has the look and sound of American synths. Ensoniq’s tour de force was to offer at the time a hardware that could produce a high-quality music project from start to finish for a rather modest price ($3000). Please remember that back then, entering the sampling universe was at least $6000 (akai s 1000), not to even mention e-mu’s $15,000 samplers or those made by Fairlight (at $75,000!).

The EPS 16+ is the third sampler in the ensoniq product family (mirage, eps). IMHO, it’s also the best sampler in the whole brand, it has this little something the others don’t. I’d rate them as follows: EPS 16+,EPS,MIRAGE,ASRX,ASR10. So, what does the EPS 16+ have that the others lack? I’d go for its flaws… Yeah, no mistake here, that’s what I meant to say. The EPS offered a rather warm grain (13-bit), with no effects. Getting to 16-bit, ensoniq wanted to convert to the standard of the time, that is linear 16-bit. As a consequence, you get a more accurate and dynamic sound.
Compared with its predecessors, its sound has a “fake”, metallic texture. Sound snappy and narrow. The ASR10 has a way wider ans generous sound, but this turns into a cons. The outcoming cound on an ASR10 is less punchy than on an EPS 16+.
The EPS 16+’s lethal weapons are its effects, sequencer, dynamics. In the end, you almost have a complete recording studio in a single unit. The sounds are of a rare level detail, effects are highly subtle, not so numerous but very efficient. In the end, you get a rather bluffing sound. Some criticized ensoniq for that pronounced, sometimes effusive sound grain. You either like it – or don’t.

For those who love precision mixing, the EPS 16+ was made for you! This is what makes the unit’s strength: its musicality, which owes all to the sound’s surgical accuracy. Listen carefully to hear how detailed the sound is. Beautiful, clean, a lot of contour (while I reproach the ASR10 and TS10 to sound more blurry, less punchy).

The EPS 16+ has this little something that makes it so sonically attractive – a device that has plenty of tricks up its sleeves, with its ridiculous 2MB of RAM it’s still able to produce tracks that do work (load while playing, boost). I won’t mention the (rather important) soundbank which covers well-known 80s & 90s sounds.

Cons (quite subjective) :
- snappy, harsh sound (can be harsh to the ear when played at high volume)
- limited memory (not a problem with nowadays’ dtd)
- sound grain (the ensoniq color may displease some users who prefer a neutral sound)

All in all, you end up with the “perfect sampler” to compose and get what any musician is after: inspiration, thanks to highly musical sounds the ensoniq way.