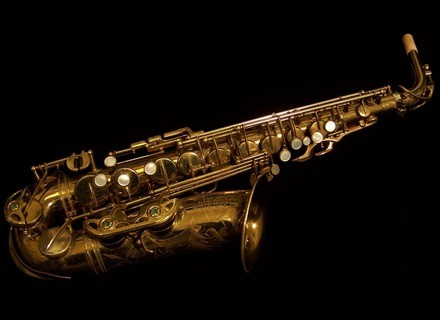 Selmer Mark VI Tenor
5
This is a great saxophone, by a great company. I looked up Selmer not too long ago, and was amazed at how many players have used their horns. This model in particular is used by many people, from John Coltrane, Sonny Rollins, Paul Desmond, Bob Mintzer, Wayne Shorter, and later players like Leroi Moore, Michael Brecker, and others. The tone is incredibly rich, and is capable of producing a soulful, full tone. The interesting thing about this horn is that it doesn't fall into a really cliche sounding saxophone niche, as lesser saxophones will do. The playing is great, the keys feel comfortable in your hand and are designed in a way that accommodates various finger sizes and stylings. The saxophone also has a great timbre range as well. I've heard players go from whispery, quiet legato passages to loud, piercing, overblowing with great ease. In fact, one of the interesting thing about this horn is how overblowing on it isn't quite as abrasive as it is on other instruments. The instrument is notable for giving the player a large amount of control, and allowing the personality of the player to shine through. This is obvious, as none of the aforementioned players sound the same, even though they all are using the same instrument! I've never had an issue with reeds, mouthpieces or anything like that, which is possibly the only way I could see anyone having a problem with this instrument. The only issue is that these, having the legendary status that they do, are possibly the most expensive saxophone you can buy, as they are widely considered to be the best in their field. If you really can't shell out the dough for this, and you want something comparable, maybe check out the Reference 54 series by Selmer, a newer model completely based on the older one. Either way, you're in for a real treat.

hjhn's review (This content has been automatically translated from French)

superloran's review (This content has been automatically translated from French)

Selmer Mark VI Tenor
5
Of the 60 superb instrument that has a sound and a jouabilit Ingala!
is now the only little sax on the new cls there are more masi n'altre this instrument in any Fabulous!