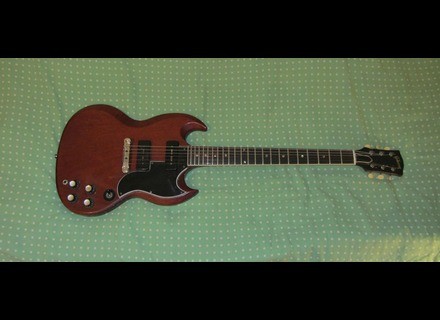 SG Special (1964), SG-Shaped Guitar from Gibson in the SG series.

tuckart's review"My 1964 red, Gibson SG is one of my all time favorites. It was my first, new guitar purchase."

Gibson SG Special (1964)
5
I didn't give a new price for this guitar because it has been fifty-two years since I plucked it off the wall of a Dallas music store. I don't remember what I had for breakfast. I do remember that I loved everything about my SG, with one exception. It was a little neck heavy. I had been playing a used Teisco Delray that I bought from a shipmate, while in the service. The Gibson was a big step up. Fortunately for me the set up was done for me at the store.

At the time, 1965, I was playing covers with friends. We had a Silvertone amp, a trap set and a beat up, Guild 12 string. My new SG was the class gear. We were playing mostly do-wop, Dylan and the Byrds and we had jumped on the Beatles bandwagon with everyone else. We sharpened our chops doing awful covers. By the time I discovered Cream, Hendrix, Jeff Beck and other musicians that appealed to me, That Gibson SG Standard served me faithfully as my skills increased. It is another instrument that I regret selling.