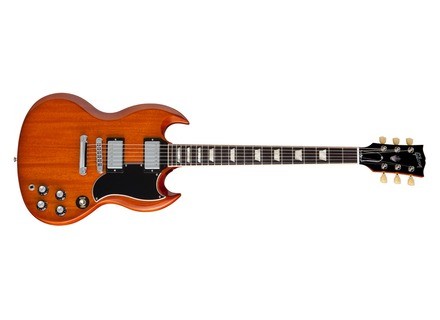 Not So standard! The SG Standard is a legendary guitar that doesn't need an introduction. It's one of Gibson's best sellers, played by some of the best guitar players like Angus Young, Pete Townshend and Franck Zappa to name just a few. But the SG we have here is a bit special because it features the Min-ETune system for automatic guitar tuning! Let's look into the details... Read more…

Anonymous 's review (This content has been automatically translated from French)" It provides!"

Gibson SG Standard 2013 w/ Min-ETune
Serious violin. Very attractive in this particular patent "heritage cherry", which is an elegant dark red.
No failure in the hoop or in the assembly or in the nail polish.
The tuners are good.
The standard model 2013 has 57 classic, it's good, they are my favorite pickups.
Another feature is the pick guard right side only with reference to models of 60's
I did not choose the model with the robotic tuner.

Playing comfort:
Stings a little nose but with a wide belt that holds the shoulder, no problem to play standing.
Its lightness is everything
The handle is a highway is the second asset. Never found such a fast race.

Sound characteristics of the SG, even if I do not have a lot of experience of this model.
Ie mid and high dominant, favored by the combination
mahogany (neck) / mahogany (body). Warm tones, powerful, loaded media

In a Vox AC with a slight overdrive, the happiness, the ultimate rock!
Powerful sound.

Good amp essential lights
The clean is not bad, and lowering the neck pickup tone I manage very well to get a jazzy sound.

It satisfies me perfectly! I use it for 1 1/2 months

I never imagined buying a SG there a few years ago.

For rehearsals, the game standing. For blues, rock, she is perfect.
For 57 classic mic to handle the rapid
For aesthetics
To be heard even if the drummer hits hard

Excellent value for money
Yes I would do this choice

thejupilerman's review (This content has been automatically translated from French)" A great guitar at a great price!"

Gibson SG Standard 2013 w/ Min-ETune
5
First things first:
Gibson SG 2013, made in the USA (mine was produced in October 2012).
White, but that takes to the limit cream. Be careful to what you see on the pictures on the net.
Long handle and wide, but relatively flat.
22 frets.
2 mics 57 'Classic.
4 knobs, Volume & Tone for each pickup.
1 switch to use each microphone independently or both.
Tune O Matic.
Key with robotic module anda Min.
Safe Gibson standard white interior.

The handle is quite nice if (like me) it has big hands and big fingers. I would not recommend this guitar to anyone who has slender fingers.
The grip is perfect! This guitar is a light, fine, and very handy.
Access to acute is (like most SG) really easy.
Gibson sound is definitely there.

Regarding the Min anda is a real pleasure. At first it seems very unreal! Unlike the older generation of Robot guitars, all settings and mechanics is "hidden" behind the head of the guitar. It is relatively quiet.
Small downside is the lack of a paper manual, that I had to rush to print from the Gibson website before first use.
After two or three days, I have gradually abandon it because the system is really intuitive. Module is activated by pressing the "Back" button, and the default is the last selected tuning tuning used. You scratch all the strings & keys magically turn themselves! It then remains to scrape the strings one by one lit in red on the small screen behind the handle. Once all the strings tuned, the system shuts down by itself. It is blowing.
A variety of tunings are available, 12 pre-set and customizable 6. (E, Eb, D, open tunings multiple, etc ...).
It is also possible to manipulate keys on a guitar as normal, except that, for strings, the direction of rotation is reversed to the other guitars.

The battery can be removed very easily, and connects to a mains transformer for recharging (one to two hours). Its range is approximately 80-100 tunings.

I tested this guitar in standard version (without automation) and robotic version: no difference is heard, we have to do the same beast.

I play in a classic rock & group of neo-rockabilly

Despite several attempts, the sound is clear "big", but warm. This is not a guitar made to play classical guitar ... on the other hand, in a little amount of gain clear sound, we get immediately a sound "bluesy" wonderful.

With regard to the crunch, gain medium, we immediately obtain a sound to AC / DC, dry, clean & clear.

As soon as we pass on the lead, you get sounds very modern, with harmonics that make you cringe hair! It really is right in the playground of this guitar ... The sustain is a bit smaller than a Les Paul (I also have a Les Paul Traditional 2008), but is still very long.

I use this guitar for 3 months now. I left Fender three years ago in favor of Gibson because I was looking for heavier sounds.

I first had a Gibson Traditional 2008 (still in my possession) & it today.

If I had to make the choice of this guitar tomorrow, I would do exactly the same, without any hesitation. The handle of this SG is nice when you have large hands, and flat profile makes the game even more

The Min system anda seems, until now, very well. The battery still holds as long as at the beginning. It should however be very tricky when changing strings because the keys are different from other models. I must also say that I sweated profusely during my first replacement strings, for fear of breaking something. Today I'm used to, and I change strings much faster than a traditional guitar.

At this price (1399 € TTC at Music Store in Germany), I think it is unbeatable for a guitar of this quality.