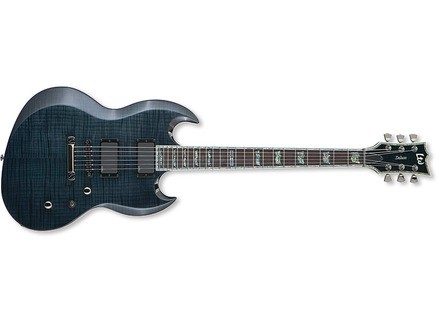 Viper-1000FM, SG-Shaped Guitar from LTD in the Deluxe Viper series.

xRiCox's review (This content has been automatically translated from French)

The handle is pleasant, almost as thin as a lag roxanne without, however, being totally pleasant good catch in hand.
Access to acute is perfect for my taste it very easy to pass of the first to the last box on all the strings without any problem.
Level ergonomic shape is suitable while the weight is enough I mitig him a little heavy for my taste but it's nothing compar has a gibson les pauls who shoots shoulders.
For sound amp knob has the background and you're pl.

For my style of music it is perfect playing more of deathcore, metalcore, mathcore ect ... the sound is bold and sharp with no lack of attack.
I play with a H & K Warp 7 head + cabinet transistor 100 watts but I was able to play on a 50 engl screamer head + cabinet 50 watt lamp; 7 the warp the sound is good and always sharp but too fat vien this amp while on the engl the sound is perfect what is expected of this guitar in my bass playing style that resonates and sharp treble
With my settings I easily sound Deathcore (bring me the horizon, as blood runs black, all `shall perish) fat (even too) and edged clear in all the sounds are possible, round, crystalline, crunchy ...
The pickups respond well with any settings except when the selector is on the two microphones and the neck pickup but good after all depends on what you like to play microphones

Edit: I play for with Engl screamer and a baffle engl v 60 4X12 sound is simply monstrous and all the sounds are possible with this guitar

I use it for 2 months
What I like about her everything except the weight and finish a little rat certain location.
I tried a lot of guitar before acqurir ltd ec 1000 m 1000 ltd, a cort, yamaha, yamaha and lag.
The price quality ratio is excellent
With the experience I remake that choice without problem is I do not what is on his great esp but characteristic are the same.
on the other hand I dconseille everything rock guitarist acqurir this guitar sound will explode too saturated.
Rhythm guitar soloist level that this is a real gem very handy with excellent grip just think argler the bridge as you like and it will be as handy as VOTR old guitar even more.
Did you find this review helpful?yesno
»

dyer maker's review (This content has been automatically translated from French)

LTD Viper-1000FM
5
- Made in Korea
- 24 jumbo frets (big what)
- 2 humbuckers: EMG 81 EMG 85 neck and bridge, active, and therefore gain more battery but works
- Bridge Tonepros T3B-T & T1Z Locking, same kind of Gibson, easily adjustable and effective.
- Earvana Compensated Nut
- Mechanical Schaller Locking, wraps are better then the agreement and more practical
- 2 knobs volume and tone-General (one volume for each microphone would have been better)
- A 3-position selector
- Thin U neck, glued, 3 piece mahogany and rosewood, tune 24.75
- Abalone inlay on the handle in the shape of flags, Viper logo on 12th fret. Abalone inlays on the turn of the handle and head.

I put 9 because except for a single volume for both pickups, the rest is perfect, very good finish, good violin.

- The handle is great! U so thin relatively flat (less than Ibanez anyway) and not round, slightly flattened in the middle position of the thumb, so superior handling, great speed slides along the handle to switch rhythm and solo.
- Access to acute perfect by the handle section, the huge cut and set neck, until the 24th cargo without any problems.
- The weight is quite high, it&#39;s a bit annoying if you play two hours standing without a break. The body is quite large and thick, which is a sign of strength and sustain, but is paid by a low weight.
- I laugh when I read that some find it stings a little to the head, all the guitars do more or less depending on the grip that the guitarist has a guitar, his habits from the guitar that was used to playing. After it happens that some guitars are really unbalanced, it is not the case with this one.
- Easily get a good sound? It&#39;s not plug and play like a real gibson who already has a characteristic sound. The sound is neutral and cold, it&#39;s normal it is to the metal and to be able to work better with sound effects. It very quickly saturate the preamp because there are plenty of gain, active pickups require, so instead of using a tube amp.
- The potentiometer positioned, what finally normal, anyway it is rather made to play all thoroughly, unless you want a clean sound then it is better the volume down a bit to avoid the risk of overload the preamp .

I put 8 seulemnt for the weight a bit annoying, and active pickups a bit confusing at first, but I am a bit harsh, and then there is no 8.5!

- This is a course designed for metal guitar: the gain is huge, but it&#39;s still accurate burr-free, the sustain is awesome. As long as we rule out its effects can be very easily mute mind-blowing, full of serious punch, and this is just one example. According to other styles a little nag that is very suitable also: heavy rock, grunge, punk ... In any case, this guitar is made for modern tones and saturated. With a good set you can get the hard rock, but the pickups lack a little personality is not ideal. As for clean sounds, do not expect her to have a funk! Maybe for the jazz-rock that can pass, as the bass is rich, but with effects that go with it.
- I use a marshall mg100dfx (transistor shit) while waiting to buy a brand lamps. I have already played on marshall tube (JCM 900, and another marshall rarer) and it is a pure joy! For a guitar of this quality should play on the lamp&#39;s clear, I regret not having enough money to be said that this guitar was a bit ruined, but I had to take her she was too beautiful! I can not imagine what it looks like a Mesa Boogie, or ENGL. I have a Boss DS1 for the distortion, and it is not the best to the scratch, it would rather fuck tube distortion!
- In its best light is to place two microphones at the same time, it gives a fuller sound. Or just put the neck pickup will give a softer sound, for example arpeggios.
- The pickups are height adjustable and I just changed all that: I set the neck pickup for more gain for solos, but it loses a tiny bit of sustain, but it gains in precision. An interesting config is a bit of kissing the neck pickup is used then rhythm and give a more serious but less accurate, and up the bridge pickup for solos which will give more harmonic sound very specific, but lacks a little sustain. In any case there is a good trade-off with all these settings.

I put 9, the sound is a real massacre

- I&#39;ve had three months and I play almost every day, many by repeating.
- I love the look, the inlays are abalone which at first a bit strange but in fact they are beautiful! it is not as flashy as you might think, in fact it&#39;s very classy, ​​and then this form is original déclalée, and this guitar a lot tends to change color depending on the lighting! it is rather dark gray, but with shades of purple and brown. I like less weight, the active pickups, which after all still a bit lacking in personality, but they are so powerful!
- I tried several Jackson, an Ibanez ... I do not even remember the model so it has captured my attention!
- Value / normal price I would say. To date (November 2007) is found at 1000 euros new, I got to 780 of OCCAZ. Best quality / price Gibson for example, which is too expensive for what it is, while it is comparable to a real SG.
- With the experience I would do yet not have that choice because this guitar was a stroke of heart. I like it as always but with experience the thrill is less, but hey, it&#39;s personal.