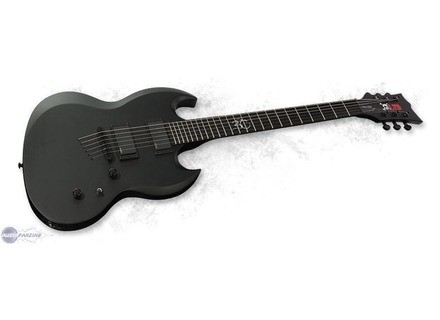 Viper-2005, SG-Shaped Guitar from LTD in the 30th Anniversary series.

tibe's review (This content has been automatically translated from French)

LTD Viper-2005
5
Guitar made in Korea, equipped with a micro-level EMG 81 bridge and an EMG 85 in the handle (active pickups, available battery on the back of the guitar). The body and the neck are mahogany. The neck is glued, not screwed. The key is ebony 24 cases. No. 30 (30th anniversary of the brand) represented by the dragon pearl.
Diapason 24.75 Type Gibson.
Black hardware.
Black satin very nice but very messy.
2 knobs: 1 volume, 1 tone
3 switch positions.

I put 9 because of the lack of a flight case.

The handle is very comfortable thanks to the varnish used, rather thin, the curved shape of the guitar promotes access to high frequencies.
The guitar is very light, good-bye back pain. Besides my American Series Stratocaster me seems to be a log (though lighter than a Gibson Les Paul).
As against the concern is that the handle tends plunged down. At first it was somewhat surprising but you get used quickly. Today I did not do any more attention. Apparently, it is possible to solve the problem by positioning the clip at the end of the horn.
Access to controls is no mechanical problem and are very accurate, no trouble agreeing.
I put 9 even though I have not found anything really embarrassing.

So for her, she is perfect for hardcore, so I think it's all good for the rest of metal styles. 81/85 microphones send a warm enough and sharp sounds, the attacks are precise, very good sustain (set neck). I use a Randall RH300 G3 head.

The clean sound is decent. 81/85 microphones and the wood used to play in a blues record, it is close to a Gibson Les Paul. I play a Fender Twin Reverb.
Note: I did not at all out of breath.

Because the 9-button tone has little effect on the sound.

I use it since August 2006, ie nine months at the time of writing, and I can only say that I do so much more loose than my Stratocaster and my jagstang no longer see the days.
I find this guitar due to its beautiful look and color.
The sound it's all good but really focused toward the metal. Playing comfort except for those whose imbalance gênerait.Il have to try long enough to be convinced whether this defect may be a criterion négatif.Pour me it is not.
Good Value / Prix.Je remake that choice without hesitation ... well now you have to rabbattre on the Viper-500 which has exactly the same features, only the Dragons gave way in the name of the guitar.

Now there's more save to acquire its big sister The ESP Viper (The MMM 14/09/07 done I buy the big sister in its cover-up ... eh eh eh)
Did you find this review helpful?yesno
»