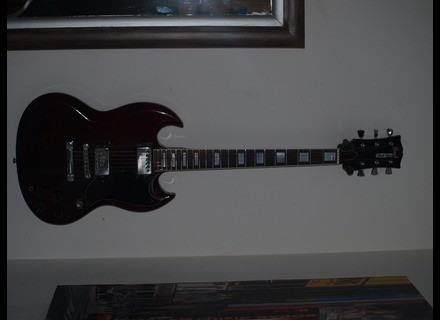 Will Vé's review (This content has been automatically translated from French)" A MOONNSSTRE! the best SG"

Pearl SG
5
Place of manufacture unknown, of the 70 Apara, very rare Tune'O matic bridge, pickups unknown but overpowering, 22 frets, white cuffs (like the Gibson Custom) marks square button (like the Black Beauty Gibson), an indescribable color, which makes blood red sun, with the wood that makes black marks in the center, as saying beautiful, head wider than a Les Paul Standard and an SG standard, in other words a marvel

his warm, powerful, holding the road to the Zakk Wylde, Angus Young's, even the BB King, the same versatility, then you need a amp that holds up what ... Sustain,: a wonder ... well not Chuis Gary Moore, then it is shorter, but it is more than satisfactory
It beats the Fender Stratocaster widely Custom Shop one of my buddies ...

I found 30 euros in a garage sale (bought from a guy there knew what he was losing ...) Then suddenly, Raport level value, we have nothing seen as strong since ... since never in fact X).
What I like least, it's more that nobody knows it at all (there is a co *** rd who thought I simmered saying that Pearl had guitars ...) then the coup I bought a Les Paul Black Pearl on a Swiss site, it arrives tomorrow

But the one I have, it is PERFECT! worth the best at Gibson SG (no wonder they did a trial in the 70's ...)
Better! It's a museum piece
Did you find this review helpful?yesno
»