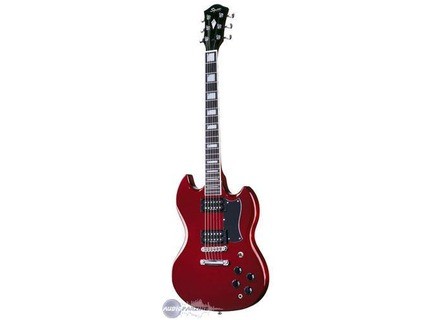 Squier S-73
5
Picked this guitar up from a Roland shop in Subang Jaya, Malaysia. I paid RM1200 for it, thats about U$315. The actual price was RM1500 or U$395 but i got it cheaper coz i bought a Behringer Firebird amp with it. Also it was a showpiece model and was already hanging at the shop for about 5 to 6 months. Anyways i was looking for my first guitar and i was torn between an ESP F-50 or this Squier. I heard alotta bad stuff bout the cheaper Squiers and i had a hard time deciding which one. After thinking for bout 2 or 3 weeks i decided on this one.

When i first saw this guitar, i fell immediately into love with it. Even though im 16, but the classic but stylish design of this Squier attracted me, even though i kinda also liked the cooler design of the F-50. Mine was a black metallic version and the colour IS GREAT!! The shape really compliments the colour. The thing that i liked best bout this guitar was that it had a mahogany body. AT THIS PRICE ITS A STEAL!! MY friend had a mahogany-bodied HAMER but he got it for a cool RM6000++ , or U$1580. With this super body the sound that exudes from it has a warm and rich tone. Mind you i achived that with only my 15watt Firebird so imagine the kinda sounds that u will get if u use it with those middle or high end Marshalls, Peaveys, etc etc. Another nice point is that is has Duncan Designed humbuckers. TO get those for that kinda price is kinda rare, so this guitar is really value for money. It also has 4 control knobs, 1 tone and 1 volume for a humbucker and the other 2 for the other hum. That means u can really play with it and get the sound u want coz u have individual control over the hums. The finger board had plenty of pearloid and abalone. Heck even the head had a diamond shaped abalone and mother of pearl inlay. It may not matter to sum ppl, but i really liked the class that this guitar exudes. And for this price, its a steal.

Only a minor gripe bout the 3-way toggle. Its abit loose and switches easily, but the guy at the shop said it was meant to be like that so i dunno whether the Koreans screwed-up or the guy was bulling me. Other than that, everything was fine.

The construction is good, like i said earlier i had my doubts when i compared it to the F-50 but after buying it i realised it is a real solid and sturdy guitar and the finishing is good. Quality wise is really good, considering all that stuff i said earlier..the body, hums ..etc etc. I haven't dropped it yet so im not sure how it would be if i tried that. But anywayz overall build is great and that goes to show that whatever ppl may criticize about squiers, as long as u find it ok go ahead and get it.

I was really torn between this and the F-50 coz i read alotta reviews that condemned the Squiers and i really wanted to shun this guitar becoz of that. But after realising that i should give it chance i found that it surpassed all my expectations for that price. So i u are a first timer or just starting out , GET THIS GUITAR!! u wont regret it and i can bet u, u will be amazed too. Unless yours comes from a way out country that u can't even spell its name, the quality of this guitar should be as good as mine and live up to the Fender name.

i like the tone of the pickups. the guitar is very easy and fun to play. i also like the color, mine is transparent teal green

it is very durable, it is made of mahogany. ive dropped this guitar many times and i dont see a single dent

i love this guitar i would have paid a lot more for it.