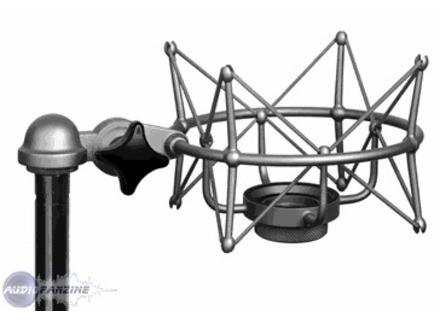 I've been using the Neumann EA 1 shock mount for about three or four years ever since I got my Neumann TLM 103.  This definitely gets the job done as it not only holds the mic sturdily in place, but suspends it so that the vibrations from the floor won't shake the microphone, which is the purpose of shock mount in the first place (although not all shock mounts do a good job).  Thus far this has held up quite well over the last few years as it was built well to begin with.  The engineering on this is just about perfect as it makes it easy to place the microphone in it and will hold it in tight.  The main thing for me is to have my microphone protected as it is an investment that I would like protected at all time.  The only problem I have with the Neumann EA 1 is that if you buy it on its own, it is ridiculously expensive new.  I got mine with the TLM 103 otherwise I don't think that I would have been able to afford it as for some reason it is quite overpriced.  This being said, owners of the Neumann microphones that this is compatibility certainly want to have proper protection and a sturdy holder for their expensive microphones and if you have already bought the mic it is not possible to go back and buy one that comes with a shock mount.  So while I recommend getting a shock mount like this for your Neumann microphone, perhaps getting a used one or an off brand is a better option because of the expensive price tag.