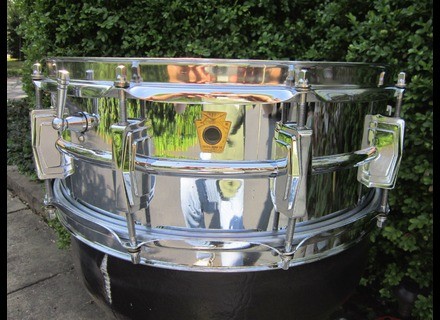 geheme's review (This content has been automatically translated from French)" LEGENDARY"

Ludwig Drums SUPRAPHONIC LM 400 1965
It took over a Hammered BB I found the sound too "metal" (maybe because very recent) and also because I wanted the vintage. I had a bowl: the former owner lives Province, is a pro music and came in a pro studio just 10 minutes from home!
It 'took me .... 10 minutes to make up my mind, including testing. It's great that fund: ca reacts to the slightest stroke of a key and / or wand, she has her own good, little metal given its barrel.
Mine is 1965, with internal mute so.
I equipped with a skin Aquarian Studio X in strikes and I left the Ambassador Snare below: this is perfect for me so I tend claps but it's still pretty hot and sweating rock ca 60/70 's relaxing a bit: the auditory happiness!
Aesthetically, the chrome bar in place is obviously good but nothing serious.
The only downside is the damn trigger P85 Ludwig always uses elsewhere it is simple but certainly an old like mine ... but now I understand there is 1000 times better and simple too (eg the DW Collector I also happiness)
The price / quality ratio is good if you like and of course we considered playing on a piece of history.
From my point of view, except secondhand good as me, it is better to buy in the USA via Ebay U.S.: there regularly in good condition and cheaper than in France.