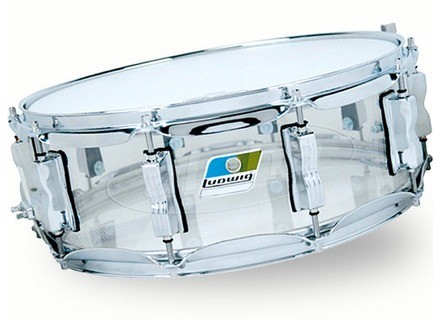 Ludwig Drums Vistalite Snare
5
The Ludwig Drums Vistalite Snare is a vintage snare drum (depending on when yours is from of course) that is part of the full Vistalite kit. The particular kit that I've used this snare with is from the 1970's. It's not the thickest snare in the world, but it's also not the thinnest as it's right there in the middle in terms of depth. Like all Ludwig drums, it's built extremely well and it's built to last. The one I've used is over 30 years old and is still in great shape - both looking and sounding. Which leads me to the sound of this instrument, which is in a word, great! It's got the perfect amount of crack to it, as it's the kind of snare that cuts through a mix extremely well. It's definitely on the brighter side of snare drums, but in general that's how I like my snares anyway. I was an engineer on a series of live recording sessions and we used this drum on almost all of them so I really got to know the sound well. It's definitely best suited for rock and pop that is up beat, but it will certainly work across the board if you need it to. I'm not sure if they are still making this drum, but if they are I would imagine that it's changed a bit in the more than 30 years since the original was made. While it's a great drum for recording, it's not the be all end all and you can't get every desired sound from it, but that's going to be the case with most snare drums. The Ludwig Vistalite kit as a whole is a great kit, but it's not the tightest and definitely has a vintage vibe to it. All in all, the Ludwigs Vistalite Snare is an awesome snare drum with a lot of pop that's great to have around the studio...

Ludwig Drums Vistalite Snare
5
The Ludwig Vistalite is a model of a full set of drums brought to you by one of the best in the business.<span> </span>Let me start off by saying that I’m not a drummer myself, but as an audio engineer have encountered and recorded all sorts of different drum sets and drummers.<span> </span>I don’t think I’ve ever recorded a Ludwig drum kit where I wasn’t happy with the end product, as I believe they make very high quality, reliable, and great sounding drums in general.<span> </span>While I’ve mostly used vintage Ludwigs, as I do believe they have the best sound, this modern kit does a pretty good job of matching up with its predecessors.<span> </span>They are definitely a bit cleaner and less ragged in general, which is a good or a bad thing totally depending on what type of sound that you’re going for.<span> </span>My findings with this drum kit were that it cut through the mix very well in the end, as everything from the snare to the tom toms to the kick as a full and well rounded sound.<span> </span>The drummers that I’ve worked with who used the kit were definitely pleased with it as well, both in terms of the sounds, and it was noted that they felt comfortable behind the kit in general.<span> </span>They usually brought in their own snare drum, or we used a different in house snare, but I never heard a complaint about any of the other drums on the kit.<span> </span>I’m really not sure exactly what kind of price range the Ludwig Vistalite drum kit goes for, but I would imagine being that it is a pretty immaculate kit, it probably isn’t cheap.<span> </span>This being said, if you’re looking for a great drum set with a name brand or not, the Ludwig Vistalite is absolutely worth checking out.
Did you find this review helpful?yesno
»

arnaud!'s review (This content has been automatically translated from French)" Particular, but what a slap!"

Ludwig Drums Vistalite Snare
4
I used it for a tour of 16 dates and 5 days of registration.

I have other snares Ludwig, but I wanted an acrylic for a while.

She really has a special attack, super explosive. The output volume is very large. The sound is slamming but still if you are smart deep with the settings. The original stamp is easily adjusted poses no problems, even for recording sound.
After this is acrylic, not the warmth of wood, nor the metallic side of course ... It's special but very beautiful.
I had positive comments about the snare sound after a lot of concerts ...
I would put a link where listening as soon as the pieces are finalized.
I have not had the opportunity to test its versatility, since I used a single register between psychedelic rock and post-hardcore. But I really loved the play-on every time.

The price seems good value, especially as I bought the USA thank you .... prices Ricans.

Last detail, it is simply beautiful.
I remake that choice without hesitation for his explosive side, and typed.

prof cool's review (This content has been automatically translated from French)

Ludwig Drums Vistalite Snare
3
I restored my Vistalite in 2004. It's a drumkit with concert toms (without skins rsonnance). Playing with skins stretched, toms 12 "and 13" sound oddly trs latin!
The attack is frank trs, which is nice for plutt the bass drum.
The hard part starts when a Vistalite is to find one whose joints welds fts show no weaknesses. Otherwise a break!
it's a nice instrument but not forcment versatile.
I almost forgot an important part of this drumkit: the look!!
L is not scabies. Translucent, opaque, with color bands diffrent, and even with lamps intgres, this drumkit does not let anyone indiffrent.
Did you find this review helpful?yesno
»