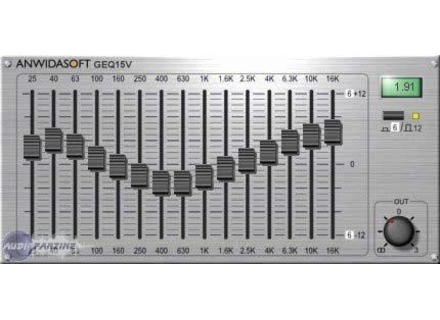 Anwida GEQ15V
3
The Anwida GEQ15V is a simple graphic equalizer plug-in that comes in both VST, Audio Units, and Direct X forms. It's not available for Pro Tools unless you've got a VST to RTAS plug-in wrapper. I used to have this plug-in on my old PC system, but haven't used it in a few years since I got Pro Tools. It's been a while so I don't remember the installation process very much, but since I had a Cubase SX system where VST plug-ins could be used, everything worked fine. Anyone and everyone should be able to use this right off the bat, as it's really just a 15 band EQ with no extra features really. The band frequencies range from 25 Hz to 16 kHz, and you can set the gain range to either 6 db or 12 db. It also has a gain output knob built into it. It's so easy to use that a manual isn't really necessary.

While I no longer have been running this plug-in, when I did it was in Cubase SX and with a Hewlatt Packard lap top computer. I was running Cubase SX 2.0 and later 3 with a computer that had a 3.0 Ghz processor and 2 GB of RAM. I didn't have too much trouble running the Anwida GEQ15V as a VST plug-in in Cubase within this system. It's definitely not a high processing power guzzling plug-in, so I would think that most users would be able to run this without an issue.

I can't really say that there is anything that stands out about the Anwida GEQ15V equalizer except that it's available at a very low price for a plug-in. It can do the job, but looking back I'm not convinced that it's a professional plug-in. It just doesn't have the warmest or most authentic sound when compared with many of the EQ plug-in that I'm using now. It's an okay graphic EQ for what it is, and while it's cheap, I do believe you can find better sounding plug-in EQ's out there even at this cheap price. I'd recommend checking out some of the URS and Massey plug-ins that give a lot of bang for their buck before this one...
Did you find this review helpful?yesno
»