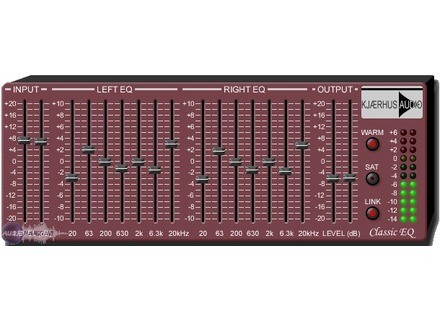 Kjaerhus Audio Classic EQ [Freeware]
5
Kjaerhus Audio's Classic EQ is a free VST plug-in that I have used in Cubase SX. It is a graphic equalizer, with both the left and right channels consisting of seven bands in addition to stereo input and output levelers. I don't remember too much about the installation process of this plug-in since it was years ago, but I definitely don't remember anything negative about the process. I do know that you can easily download this plug-in and the other free Kjaerhus Audio Classic series plug-ins without a problem from a few different locations. I never had a need to look at a manual for this plug-in and I'm not even sure that they make one.

When I ran the Kjaerhus Audio Classic EQ plug-in, I did so on a Hewlett Packard Pavilion dv8000 lap top that had a 3.0 Ghz processor and 2 GB of RAM. I ran it only in Cubase SX, but it can definitely be used in any software the supports VST plug-ins or others if you have a VST wrapper. None of these Classic series plug-ins from Kjaerhus Audio seemed to have taken up too much processing power, so I don't believe that most users will encounter performance issues, as I certainly did not. I first used this plug-in about six years ago, but stopped using it a few years ago when I switched to a Pro Tools LE based system.

The Kjaerhus Audio Classic EQ was definitely one of the equalizer plug-ins that I used a good deal when I was running it. For a free plug-in it was very useful and has a pretty clean and impressive sound quality. While I do wish that there were more bands to work with, it still does work well if you're just doing some simple EQing. The presets are actually pretty good as well, as they can serve as great starting points. Since this plug-in is indeed free, I'd encourage everyone with the capability to run VST plug-ins to download this plug-in and the others in the Classic series.
Did you find this review helpful?yesno
»