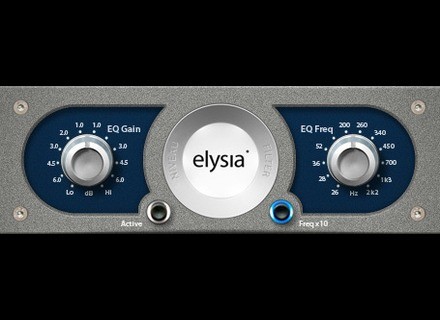 Elysia the niveau filter
4
The Elysia Niveau Filter is a free equalizer plug-in that comes in RTAS, Audio Units, and VST plug-in formats. I'm pretty sure you can get it for either PC or Mac operating systems, but I've only used it on a Mac. The entire process of downloading and installing the plug-in should only take a matter of minutes, as I was personally able to have the plug-in up and running in Pro Tools very soon after deciding to download it. As far as the make up of the plug-in is concerned, it's a very simple interface. It's only a one band equalizer, so you'll need to stack them if you want to use more than one band. It's got just two knobs for gain and for frequency, as well as buttons for bypassing and for multiplying the frequency by ten times. That's really everything you need to know about the plug-in, but there is a short manual available for this plug-in if you want it, although I personally haven't had a need to look at it.

Right now I'm running the Elysia Niveau Filter on my Mac Book Pro that has a 2.2 Ghz Intel Core 2 Duo processor and 4 GB of RAM. I've been running it in Pro Tools LE 8 that I run with a Digidesign Digi 002R audio interface, and within this configuration I can't say that I've had any issues at all running this plug-in. It won't take up much of your processing power at all, and since it's free there is certainly no harm in trying if you think you're system might be on the fence.

I don't have too many complaints about the Elysia Niveau Filter, as even though it's a simple, one band equalizer, it's still free and has a pretty clean sound. I like using this for really simple EQ jobs when I know exactly what I want to do with it. Of course there isn't much flexibility since it's only one band, but you can always stack them if you want more. I like the simplicity of this plug-in and would absolutely recommend it for all DAW users who would be interested in a free plug-in (which should be everyone). Definitely do yourself a favor and add the Niveau Filter to your plug-in suite today...
Did you find this review helpful?yesno
»

Published on 04/30/10
elysia has released the niveau filter section of the mpressor as a free plugin.