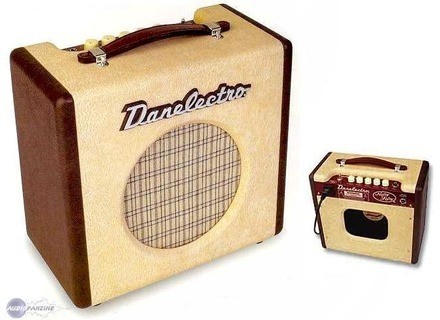 Danelectro Nifty-Fifty
4
I bought this amp from a small music shop in Brighton, England for a very reasonable £85. ($129 list price?) I needed an amp because I had been dragged kicking and screaming out of (musical) retirement to play at a charity gig for the local community.

If you happen to like retro styling this amp is great. As I was reviving songs I had written when part of the 70's punk era a nice polite sound was definitely not required. This solid state amp can do very clean or a warm valve sound but in an unashamedly rock 'n' roll way. I don't know if many jazz-funk players would like it. I stuck this little amp on a very large stage in front of 650 people with the volume on 2 or 3 and although it was miked up through the p.a., I don't think the engineer was using it much if at all. It seems to fight above its weight.

You can't turn it down enough to play it in your bedroom. The volume knob goes from VERY LOUD down to LOUD then straight to OFF. I found the clean sound a bit 'razor blades' on the ear when used with a telecaster, though I thought that about Music Man amps too and we all know who designed them (Leo Fender).

This box has a nice rugged feel to it. If this amp was a car it would have leather seats. As it is it has a thick leather handle like an old school satchel. It has a reasonable weight for its size.

Danelectro has been making amps for over 50 years (which is where it gets the 'Nifty Fifty' tag - it's actually only 15W rms) but the company appears to be showing no signs of growing up. I certainly have a soft spot for this company's eccentricity. Remember those 60's 'lyre' guitars they made from hardboard?
So, am I the only person around who would be seen dead playing through what looks like an antique valve radio? The Peter Bruntnell band used one to very good effect at 'The Greys' in Brighton this December. Enough said.

Doherty's's review (This content has been automatically translated from French)" The Good, the Bad and the Ugly"

unclair that raproche of a fender champion
a dirty fuzz mode svre sending crunchy blues to heavy metal type 70's
it is clear that as the sound is vintage look
has all its warm floors!

less:
no footswitch
no reverb


great amp for a 15w transistors
but has reissues lamps with a reverb spring will make one of the best amp on the market
Did you find this review helpful?yesno
»

Doherty's's review (This content has been automatically translated from French)" The Good, the Bad and the Ugly"

very simple, you branches, you play!
The manual contains basic settings of very good quality
10 minutes to find your sound you suffises

unclair that raproche of a fender champion
a mode that sends dirty fuzz severe crunchy blues to heavy metal type 70's
it is clear that as the sound is vintage look
its all a hot story!
resonator with the blues, jazz with a half box and a real treat for the metal you forget anyway qvec look like impossible to shake your little gothic want impressed with the intro still loving you
this amp is for the musician apart who do not want to sacrifice good sound power

Cons:
no footswitch
no reverb


great amp for a 15w transistors
but reprints a lamp with a spring reverb make one of the best amp on the market
Did you find this review helpful?yesno
»

See all 10 photos of Danelectro Nifty-Fifty »