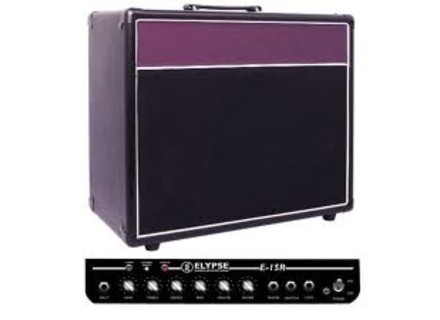 The configuration requires no special comment. Practice the two small lights of different colors to indicate precisely which channel you are.

A manual is provided with, fine paper, with models of basic setting for beginners.

Amp study acquired "a disaster" before leaving the province for a week of work components. The HP of my novanex 6w passed away recently, I had another emergency low amp gauge, no more stand modeling certainly successful but lacking in my life V-AMP2.
Only mag nearby Milonga. A music store where the public can at least try tranquillou amps.
Field Testing of a few small combos with my Telecaster cusom a TS9 in 1978 and 1982. Research before any clear sound that allows drinking my TS9 to express themselves fully.
I tried including the ones I have chosen in a first selection
- VOX DA5: nice grain, his phone, little or no grave, no scope, but his nervous pleasant. Probably a very nice cabinet with a 12 ', but there the laptop side disappears.
- Fender Mustang I: a new a priori attractive with all these models and a bunch of cool effects, after 10 min, the poor dynamic (soft response with a pick) on the treble side synthetic and his lack of "grain" makes me let go the case.
- Roland 15 R: Modelling yet, its "boxy" fairly medium, lack of scale and sensual again, maybe a hair less synthetic than the Mustang.
Unfortunately, I have not had the opportunity to listen to the series of Peavey Vipyr to compare, and I dropped the case also with series of in line 6, not appreciating that their modeling affects clear sound quality.
Youngest: the Elypse made for stores Milonga. I dared, yeah. And fortunately.

Bin there, I played on what is called a guitar amp.
Let us be clear, it's low-end to work solo or Pénard Chtit taken to make a few models on the fly.

First observation: the amp reacts nervously at the stroke of pick, the momentum is finally here, in the limit of 15 small watts.
The sound is clear in all successful, with finally a real serious amp worthy of giving much larger mellow sound.
Of course, pushing the HP is no longer at the party and happily compress bass. But there is already enough to puncture the tires of seeing his body by his neighbors.
The treble can be a bit but not too much slamming of metal, it arranged with the equation whose amplitude is not but has a huge severance musicality correct.
Finally, the distortion has a color typical transistor and it buzzes at high gain. The crunch, it can mislead a bit by cutting the treble. At this stage, the drive channel without troubleshoots more.

TS9 with a 30-pins on the clean channel, one finds the beautiful grain creamy overtones of this crunch / overdrive legend, it is difficult to know on a transistor ... Acompli mission: with a good pedal, overdrive and clean sound quality quite suitable for work.
Last point, the spring reverb, if not my favorite gadget and the digital mustang because more personality, though undoubtedly less accurate. It sounds really clear and I appreciate.

Clear sound with ample real serious look at the size of the measured gear (but still 9kg, this explains it ...) and especially the price, the sound and dynamics of a pedal if you are globally respected does not grow at the 15 Watt donf. It sounds more "real" friends that modeled. It "feels" his guitar and there is essential.

An engagement with a TLM193 confirms the possibility of convincing mockups on vacation.

At 89 euros, the value for price is right and saw the price, who cares to put it loose in the car to bring it with you. Some will be disappointed by the lack of effect of loop, modeling, multiple effects. This amp is for those who want a relatively small basic amplification respectful of his guitar and pedals. And there, under the low prices (do not forget) I think the contract completed.

Simply because no redundant modeling effects.
A paper manual with the basic settings to clear those starts.
The sound is easy to find given the small number of setting what motivated my purchase no-brainer.

Should have any style zik.
With my Yamaha I obtain a clear simpa really good with very serious.
Super Chorus pedal with my boss and sound even better but with my Metalzone is a mess ... The crunch channel and really not bad in view of the price of other more expensive amp does not rivaled peuveut same price.

I bought a Milonga or early December I tried several models in my price convinquant nothing. I was surprised by the price, well the sound so no eSite.

I do it again this election without a problem ...
Did you find this review helpful?yesno
»