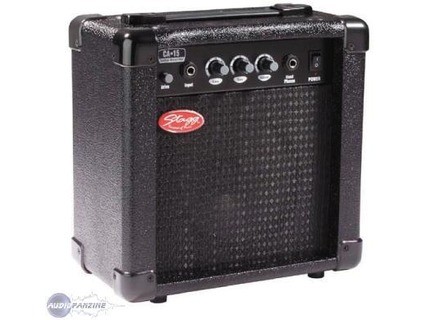 Jorjy boy's review (This content has been automatically translated from French)

Stagg CA-15
1
Transistor amplifier 15 watts normally .. All three buttons: Volume, Gain and Contour. There is also an input for connecting a headset .. more a button to initiate what they called "Drive" ..

Easy to use from the moment there is nothing to change the son.Obtenir good sound is almost impossible in any case have tried several I can certify this. I had no manual so veiled but not need it quickly understand how it works.

Then the gate that is .. I played it with an Epiphone Les Paul. For the clean channel first, the sound is flat and change the contour do not change much. Drive In up to half Crunch was one you might say it like that and then it becomes very brouillon.Je can not say I like a particular sound, but in absolute Clair is "safe" to work alone at home

It lent me this amp that is 4 + months .. then, .. light? . I do not like everything else in vérité.j 've tried a few models since then this amp is not for me and I did not hear a sound model that is true is less bien.Alors amp cheapest so I think some will say that it is to start ba TFW mal.mais not really better to keep his example 60E to buy a Vox Pathfinder 10 watt which sounds as strong and far better to not even a 15aine Euros plus.Donc veiled rather poor value for money to finish.
I would not recommend this amp because it just disgusts it is true of the electric guitar .. After all this is only my opinion but hey if I could save 60 to a few people I would always do that because as I said there are better bcp bcp bcp and not necessarily for more money.
Did you find this review helpful?yesno
»