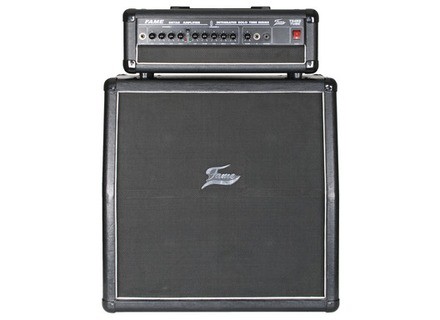 Fame Megatone T64 RS
4
(Originally written by SlapKid/translated from Audiofanzine FR)
I owned this stack since 2004 and I sold it recently.

Similar to the Hartke Piggyback 408 because it comes from the same Chinese factory (named Megatone... afterwards each brand adds its own sticker).

Serial FX loop, reverb (always a bit audible even when the control is turned fully down), Electroharmonix 12AX7 preamp tube (also for the clean sound).

Gain, volume, bass and treble controls in the clean channel. Same settings plus medium control in the lead channel.

Extremely easy to use.

The beautiful finish is surprising considering the price. BUT:

I had to tune the speaker cabinet because it vibrated above a given SPL: I used a lot of wood glue to seal the joints. ALSO:

I had to change the channel selector and the tube since they were both faulty and the amp didn't work well...

This amp is nice because it combines two sound personalities: warm and present in clean mode, which is perfect for jazz musicians among others (the 8" speakers sound accurate).

In distortion mode it produces a JCM800-like sound! With the gain setting at minimum you get a power blues sound. Set at 11 o'clock, you get a powerful sound for rhythm parts while at 3 o'clock the amp produces a versatile solo sound. The amp doesn't generate too much noise but I don't play a Fender guitar.

The mid control is very useful and it doesn't alter the sound.

The original reverb sounds awful so I installed a short Accutronics (235 mm) in the amp and now it's much better.

Notice that this applies to another speaker cabinet because the original one didn't match the amp. It sounded too "disco" and it didn't produce enough mids. On the contrary, it sounds very good with a 100-watt Marshall head so I wouldn't say it's a bad speaker cabinet.

I got the best results with a closed 212 cabinet (Celestion G12T and G12P speakers).

This stack is worth its price when you tune it.

It has the right size and looks when you use it at home but the day will come when you will have to buy a better amp. For this last application I connected a multi-effects processor in the FX loop to play at a reasonable volume.

The problems I had with my stack were surprising because it's not usual for an EH tube or a switch to get broken after only two months.

As a summary, it's a good stack (with three years warranty).
Did you find this review helpful?yesno
»

tristanelliot's review (This content has been automatically translated from French)

Two channels, one a clear saturated. Optional footswitch. (9 EUROS IS NOT DEATH)

The config is super simple, anyway, there is no manual.
This gives a good sound easy, but for my part, not "the" sound. But for 225 euros do not dream.

I'm pretty pop rock, I find the sound a little too clean, except for serious lacks some precision on boosted channel.
I play with a Fender Start ash lite, I plugged my big muff, the sound is great at 3 / 4 volume, but now my head explodes.

I've had three days, he has an evil potato.
His problem for me is the potato, allow plenty of room, and a jack of 10 meters, otherwise you will be bald before the hour.
The downside however, the reverb does not have much effect. Any way I intended to buy a pedal or two.
J ai rather combo with built-in effects. J Marshall had a 30 dfx, I dropped.
I'll probably buy one of their little lamps to complete my set and play on the go.
The value for money is unbeatable.
With experience, I would start with a less powerful, but I do not regret my purchase.