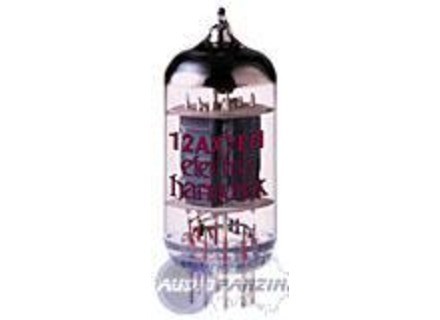 View all offers for Electro-Harmonix 12AX7 »

Electro-Harmonix 12AX7
5
The Electro Harmonix 12AX7 is a standard tube that can be used for a variety of applications, but I use these for my guitar amplifier.  The model of the 12AX7 is a popular tube these days because it is cheap and gets the job done pretty well.  In addition to making fine pedals, Electro Harmonix has a line of tubes, which in the 12AX7 is probably their most popular tube.  I currently have a few of these in my 1976 Fender Twin Reverb and they do the job perfectly.  While there are certainly some more expensive versions of the 12AX7 out there that sound better, Electro Harmonix's version of the tube is cheap enough where I feel that I can replace them on a consistant basis without breaking the bank every time.  At first I was a bit skeptical knowing that Electro Harmonix is a pedal company and not primarly a tube company, but after installing these in my Twin Reverb for the first time, I was pleasantly surprised and have since continued to use Electro Harmonix tubes in my amps.  I have used the Electro Harmonix 12AX7 in a few other amps as well and have gotten similar results that I have been happy with.  While different tubes won't necessarily change the sound of an amp, when good tubes are installed in your amp you know that your amp is working to the best of its ability and isn't being limited by anything.  Installing the Electro Harmonix 12AX7 in your amp will only take a little while if you are familiar with how to do so, and if not I would recommend bringing your amp down to your local music shop to get it done and maybe have them show you how to do it so you know for the future.  I was wary of chaging them myself in the past until I was shown how and now its great to be able to do so.  If you are looking for a 12AX7 tube, the Electro Harmonix 12AX7 is a great choice both in terms of price and quality.

Electro-Harmonix 12AX7
2
lamp used on my HIWATT in different position. big sound and huge gain against by no means silent, she brought a major buzz. she was little Faulty be, but for the price (15 euros) I think the value for money is not great.

Electro-Harmonix 12AX7
4
This is a lamp with a gain quite expensive (comparable to Tunsol 12AX7)
a little ground in the mids, it sounds a little "vintage".
I think it sounds great in position V1 low gain, it adds wealth to clear his (nice bass + treble crystalline).

on the other hand, it goes to the gain (> 3 on my amp) it begins to saturate VERY quickly and the sound management of low frequencies, which is fairly typical of Russian lamps.
So, in my amp (100w Jetcity) saturated sound loses the definition (but what a potato!).
I therefore prefer to V2 position (lamp used only by the saturation of the amplifier channel), the grain is very "grainy" and the distortion quite elevated.

To summarize, a good lamp cheap. But beware, if your bass amp has already beautiful, it will be a little too heavy. on the other hand, if you have a feeble or too loud amp, it apporterta gain and depth to your sound.

Electro-Harmonix 12AX7
4
I use this lamp on a distortion pedal for Tube Works Real Tube. I simply removed the original lamp (still good) that I replaced with this one to see the differences:

With the Electro Harmonix 12AX7, the sound is more crystalline. One can adjust the distortion at a relatively low level without losing a lot of potato (beneficial use on a piece of rock or blues). When the effect is set up, the sound is very powerful.

However, at the equalizer, the medium's almost absent. It's a shame.

Did you find this review helpful?yesno
»
Read the 9 user reviews on the Electro-Harmonix 12AX7 »