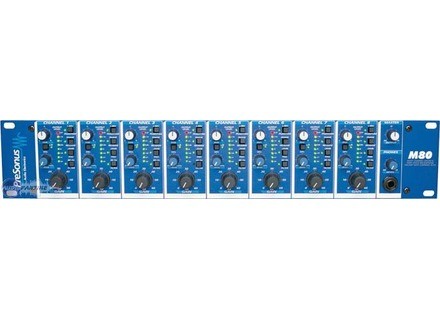 All user reviews for the PreSonus M80

blackle's review (This content has been automatically translated from French)" 8 channels almost royal .."

PreSonus M80
4
The M 80 is a preamp mic / instrument channels eight, housed in two rack units. Each channel has a connector "combo" while accepting both the XLR Jacks 6.35 mm.
The inputs are equipped with a transformer Jensen brand. Each entry has an extra loop insertion balanced jacks, and a balanced output on XLR. Nothing prevents the use of insert as output jack, and insert return as line level input jack is very convenient, and M is the 80 becomes a true Swiss army knife ..
The M 80 also has a few other inputs and outputs: stereo mix buses are XLR output, level adjusting knob via its "Master Output." Cest on the bus stereo headphone that takes its signal, and of course it has its own independent level control.
To finish the presentation, a pair of XLR inputs on connection to send a stereo signal from an external console, recorder or other bipiste M 80 for example, directly to the stereo bus of 80 M .

Each input selectors commander, from top to bottom, phase reversal, the activation of the high-pass filter centered at 80 Hz, 20 dB attenuator and the introduction of phantom power.
A key "L / R" allows you to assign another given input to the stereo bus and is surmounted by a panpot. The big gain control will in turn from 0 to 60 dB, it is graduated in steps of 10 dB easily readable (this is important). Nothing very complicated at the moment ..
There is also a knob meets the sweet name of "Warmth", with a scale ranging from 0% to 100%, he is responsible for assay the action of the circuit called "IDSS" by Presonus, which increases the level of harmonics Pair pre-amp that is supposed to reproduce via internal circuitry. Each channel has an eight-segment LED VU meter indicates the output level. It is relatively convenient, for it is against a pity that no visualization or output clipping being present on the stereo bus, making it extremely risky management of input signals at high level.

It's always an enjoyable challenge to compare the pre-amp microphone, an area where differences can sometimes sound quite subtle .. I use the Presonus M 80 for the past almost 10 years, it does not take me long to identify the personality of the machine: a very flattering color (the reason for my choice) that changes in some cases, pleasantly ultra transparent sound and clean clinic not always saving!
Personally, for most of the record, I often prefer to use microphones preamps have a certain character.
By setting "IDSS" at least, the sound of M 80 can be reasonably described as "exact." In contrast to sound extremely open and airy than the Presonus qulifié to be compact, with a setting in front of the midrange, but not aggressive or hardness. This machine complies with all the details, but the high end is not very large or favored, which is an advantage for a couple singer / microphone that "whistles." Also a microphone that I found on a bright acoustic guitar has considerably "softened" and the final sound was quite a pleasant time spent in this machine.
When you turn the knob a little bit of IDSS, the character of M 80 exchange at all! We can see first a slight reduction in the high and thickening of the lower medium. Cranked, the IDSS "off" the treble and the bass slightly rounded. It may seem strange that by increasing the total harmonic distortion, one has the impression of perceiving less acute, yet it is what my ears perceive sound that I described as "stocky," it said I prefer non-colored for my position microphones or other sound sources a little too bright. Anyway the important thing is to choose the combination microwave / pre-amp ..

As mentioned above I use the M 80 for almost 10 years now, and I appreciate every day the sound clear and consistent on this unit. However I do not like viewing levels for improvement, the absence of a VU meter output is really crippling. This is of course not a Neve or Harrison, but the price is not the same either, do not forget it.