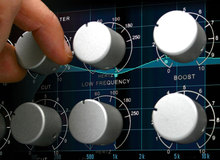 This tutorial is a follow up to the other tutorial I wrote called "How To Use a Parametric Equalizer."  While that was the basics of the make up of a traditional EQ, this will go into a bit more detail about some situations where EQ is useful and some starting points on how to use it best.

For those who haven't read my other tutorial on the basics of EQ, I will quickly go over the basics on using an equalizer and the working parts that one usually will have. Parametric EQs generally have three parameters - frequency, gain (level of db), and Q or bandwidth.  A graphic EQ consists of a series of preset frequencies with the ability to change the overall gain up or down.  I'll mostly focus parametric EQs in this tutorial as I feel that this is the most useful type of EQ...

During the mixing process I am constantly trying to make sure that every instrument and sound has its own space in the sonic spectrum.  Doing this means accentuating certain aspects of a sound and drowning out other features of certain sounds that you may not want.  EQ can help you to do that in a variety of ways.  For example, let's say that you have a lot of noise in a signal and want to get it out.  The best way to get rid of it is by using EQ to drown out the frequencies that the noise is in without affecting the original sound that you are trying to portray.  This can be a fine line and often hard to do, but thus is the battle mixing.

Now that we have talked a bit about how and why we want to use EQ during mixing, let's talk about some specific techniques that can be helpful in our journey.  One simple thing that we can do is to use EQ as a high or low pass filter.  A high pass filter is one that will cut out the lower frequencies and a low pass is one that will cut the high frequencies.  These are often found built into software EQs and on hardware EQs the same effect can be achieved by setting it to the lowest or highest frequency (depending on which you want to use) and setting it the same way you would the high or low pass.  For example, I will always use a high pass filter and cut up to 88 Hz on electric guitar, as I know that a low E on a standard stringed guitar sounds at 88 Hz.  An example of using a low pass filter would be on kick drum where I would want to make sure that all of the low end comes through on the signal...

So we've seen how low pass and high pass filters can be helpful and this same principal can apply when using general EQ all around the frequency spectrum.  For example, let's say I have a lead vocal part that I want to really stand out in the mix.  I know that around 1 to 5 KHz is the frequency that human hearing is most acute to, so generally speaking I will boost a decibel or two at that frequency on lead vocal parts as it helps it to stand out above the rest of the mix more.  This exact frequency will of course vary from person to person so listening to the sound is always the main thing to take into account.  This isn't an exact science by any stretch and there are a ton of different approaches to this...

These sorts of techniques and ideas should be apply to every sound that you record out there while you are mixing.  While some things won't need any EQ, I find that I generally have some sort of EQ going on almost every track when the final mix is all said and done.  EQ has a world of endless possibilities and is one of if not the most important part of mixing.  The only way to get better and more effective results using EQ is to continue to practice and try new things!

I hope that this tutorial was helpful and please feel free to contact me if you have any questions!
Did you find this tutorial helpful?yesno