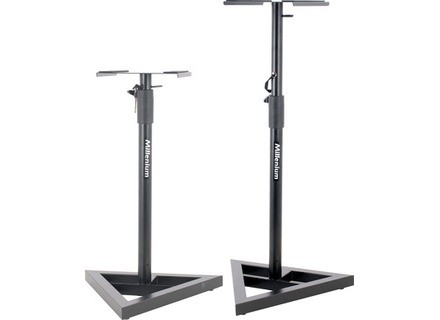 Anonymous 's review (This content has been automatically translated from French)" This is great!"

It does not move. I have to buy another pair for my second pair of monitors.

I recommend this product, which comes with flat rubber tip and metal spikes so that we will use one or the other, depending on the soil type.
Did you find this review helpful?yesno
»

unterizengald's review (This content has been automatically translated from French)" Stay away. Frankly."

Millenium BS-500 SET
1
I do not understand the positive reviews on this product. For once I regret my purchase and they leave right away to the sender.

Be clear and honest, it's fun equipment.
The trays are not rights at all. (See photo) Normal, the hole for the screw is not centered in the case of bending at the center of the plates. So you either have speakers that lean or they are directed to the floor / ceiling. Too well. Not to mention the impact on the stability of thing.

Stability, talk is relative. Flicking enough to overthrow all even if the height is at a minimum. I can not imagine if we want to perch his pregnant 1.80m. Both fit on a wire in balance, it will come back to the same.

Another detail: the screw at the junction of the two tubes of one of the feet runs idle. Just because he did not think a system to tighten the nut behind. May Day.

It's ultra cheap material, poorly done, poorly thought out. End of story. Its low cost does not excuse such construction defects.

Save yourself that and do not take into account the views "positive" you can read about this here and on Thoman ...

hhub17's review (This content has been automatically translated from French)" do the job, but beware of mounting"

Millenium BS-500 SET
3
Bought there six months. Before, speakers were asked on the desktop, too close to the wall and too low.
No other models actually tried, just a glance at the feet sono truc'occase near my home, where there was nothing suitable. I looked internet anyway to get an idea.
The bonus: they do their job, pregnant take over without moving with plastic strips, and the sound is not one of my floor or office rather than the speakers.
The - I've had the same problems as other buyers, namely the slope of the plateau, even by screwing a month or two as we recommend in IK.a and blow my speakers are not strictly oriented such , but also the home ground is uneven therefore not entirely their fault, but I was hoping to make up for it with the pad adjustment or spikes that screw underneath. Not doing enough margin, otherwise it locks. Do not even put when pregnant too heavy on it, because the tubes and plates are sturdy, but they hold only by screws a little limits, especially given the type of plate mounting: screw in the middle alone connecting the tube. This is the thread the weak point in reality.
Briefly, SAMSON RESOLV A8 is a bit limited I think.
Value: Very Korrect! They are not expensive and well worth the price of the metal there was in it.
With experience, I would do this choice because, despite irregularities in manufacturing, they are well worth their price and my home studio is not a dance but a quiet place so not too much worry for stability. And I'm a little handyman and I synthetic resin to remake a thread if it is draining or lend a welding arc.

gromeul's review (This content has been automatically translated from French)" Strong, stable and inexpensive!"

Millenium BS-500 SET
4
Newly acquired used to be asking my monitor speakers (Samson Resolv A6), sturdy construction, convenient to adjust, secure them with safety pin, stable (even if it is obvious that we should not rush too much) after a test by giving them a little help, these feet have not failed (pregnant about 1.1 m).
I recommend this purchase, even new, the price / quality ratio is unbeatable!

Did you find this review helpful?yesno
»
Read the 7 user reviews on the Millenium BS-500 SET »