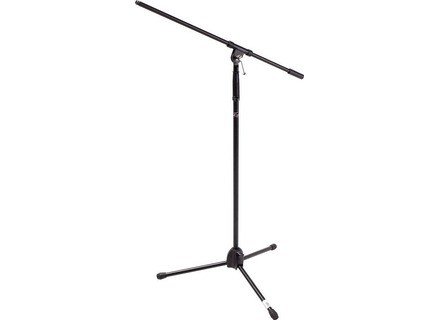 Proline MS220 Tripod Boom Microphone Stand
5
The Proline MS220 is a pretty standard Tripod Boom Microphone Stand. It isn't the cheapest mic stand out there, and is actually built pretty well. While not on the level of the sturdiest stands out there, it will still get the job done better than a lot of the other competition out there. Upon first setting up the stand, I noticed that it was easy to manipulate and to get on its feet and in the position that I wanted to get it in. I was setting up a large diaphragm condenser microphone in the recording studio, so I needed a stand that would hold the mic in place well for an extended period of time. While there were a number of stands in the studio, a lot of them were in use, so the MS220 was one of the bottom end stands that were left. This isn't a knock on the MS220, the studio just had a lot of really heavy duty stands that we use before touching the stands like this one. However, in terms of tripod based boom stands, this is a very solid stand. While it will cost you a bit more than average when compared to other stands, it is still an in between level of stands, as it isn't built as well and won't cost you as much as the best stands out there. For use in both home and professional studios, I think that the MS220 will get the job done. I'd say that if you're a home studio owner looking for a stands that won't break in a couple of months, but don't want to spend too much money on the really heavy duty stands out there, the Proline MS220 is definitely something that I would recommend. On the other hand, if you're a professional I'd probably only recommend this as something to use at the bottom of your stack of stands, meaning in a professional studio it is a good idea to have really sturdy stands to use first, and then something like the Proline MS220 on the back end. All in all, this is a very solid mic stand that will get the job done in more situations than not.
Did you find this review helpful?yesno
»