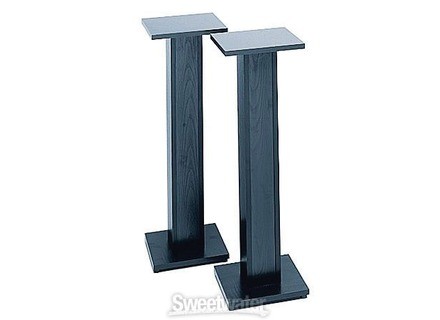 Raxxess ERSS-36
5
The Raxxess ERSS-36's are a set of 36" monitor stands for use in recording studios. The professional studio that I work at has a number of rooms on site and we have these stands in one of our smaller mixing rooms. Right now we've got a pair of Dynaudio BM15A's on them, but we switch out monitors here and there to meet client needs, so we've had a few different pairs of monitors supported by these stands at one point or another. They're definitely reliable and well built stands as I've never had a problem nor seen any issues at all with them. They seem like they'd be able to support some pretty large monitors, but to date I've only mounted a few pairs of smaller monitors like the BM15A's and Genelec 1030's I believe they were. They do also make these stands in a larger size in terms of height, so it's nice to have the option if you need your monitors higher or lower up. These are probably best suited for near field monitors, which is what I've used them for, as I can't see these being useful for mains really. They're definitely going to be best suited in smaller studio environments in general where you might not have the luxury of a large desk to place monitors on. Having said this, the Raxxess ERSS-36's are of course useful in any situation where you see fit. The bottom line with them is that they're well built and will hold up your monitors for as long as you need them to, as I can't see them ever breaking unless by a freak accident. I'd suggest doing a bit of research to find the best suited monitor stands for your studio and the exact monitors you have, but the Raxxess ERSS-36's should be able to suite the needs of most studio owners out there.
Did you find this review helpful?yesno
»