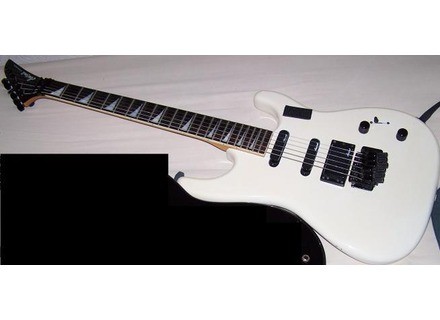 Channel pleasant, classic profile in C
Access to acute right
Weight: very heavy, multi-body (plywood in English) to say the plywood!
(This is not really a problem because the tailpiece is not through, the Khala corresponding to a vibrato screwed onto the body directly incorporating a spring)

Given the shape and configuration, it is rather a typical guitar Hard rock, Metal!
On a multi-effect, it gives a very correct, but the humbucker is limited: simple position the sound is low, lower than the simple two position handle and plant.
Better to change it and put a Humbucker most powerful kind of 6-12 kOhm (on my Aria jackson splittable microphone was mounted) Also the pickups were changed simply by Jackson single coil: the sound is now more on edge all positions

Bought on Ebay recently rediscovered a model of twenty years of age! as vibrato Khale really nice ropes with locking in mind to take the agreement!
The least: the humbucker but easily replaceable.
This guitar has very good action, comparable to the fender or gibson. To start or nostalgic (like me) it's a great shot in time (much better than the Squier Stratocaster or other copies of Chinese, Korean or even Mexican)
I recommend this model without hesitation

Sg111's review (This content has been automatically translated from French)

Aria Pro II XR
4
japanese manufacturing,
Floating tremolo bridge with locking floyd immitation of rope at the top of sleeve
22 freight
micro S / S / H there are soft and they lack teeth but all three are roughly in balance
knob a master volume, a continuous background has always more or less spit as soon as look at him and a knob tone, the way into the treble there is no nuance to it very quickly from serious soup.

a 5-position pickup selector.
I have bought the 1500 for France with his amp in the late 80's that is why I raise it a little note.

very round, see too late (you touch three strings by a bend gently, fortunately I have a fine-boned if it is crossed with the tip of the index) but suddenly quicker and more relaxing than handle D.
the body of the guitar is heavier than the strat it mimics.

the "sound": the most subjective part. It sounds like a skyscraper of 1000 francs at the time (I remove the amp for 500 francs), I would say it sounds better than a scratch from € 500 now. the sound is clear and clean enough to support a transition to multi purpose.

I get enough clear sound without actually typed it while pulling a colored Start (position 2 and 4 of the pickup selector) on the runny it's easy to slip into it quickly but it's disgusting.

She went through a lot of tube amps jcm 800 with among others, JMC 600, HIWATT three bodies, two fender body
and the transistor 35 rge aria, a small calsbro, a laney a fender jazz chorus ...

but his lack of bite is undeniable. (severe lack of accuracy as well).

I use deuis the late 80, I tested some other models but I can not afford.
For the record I still do ca laugh when I was listening to mix, make pro in the studio of the famous 32 tracks of the era, with the mid-strats and gibsons my little aria who was walking here, and the obtained from pseudo pro rave reviews which merged with US strat.

In hindsight, a few years, I realize that its defects have forced me to adapt my game notament for the right hand to compensate for the lack of natural exprésivité of this guitar. As you change your guitar and you spend it at higher ranges of the cake.

Yes I would do given the choice lines pécédentes and context of the purchase.

Today I still serves to mumuse, she'll need a good refrettage and not be changing the pickups ...

fred_etc's review (This content has been automatically translated from French)

Aria Pro II XR
3
I have exactly the same pattern as in the picture but green apple.
purchased less than 1500 francs in 1988.
At the time it was the low end.
Qund I see the price of the argus I'm sick.

The handle is in C, very correct.
The handle is screwed and pleased thick, access to acute is average.
The accuracy of the notes is average.
For a stratum is a bit heavy
The sounds are very simple
the fact that the strings are locking is a real +.

In clean sounds it is very average.
Distortion against it in a certain character, it's a pretty nice edge, it's a guitar that requires nerve is being mistreated.
I do not play that rarely, but every time I am pleasantly surprised.

This is my first electric guitar so I do not part with it.
But today I do not buy it back because I had a guitar requires more in terms of power, ergonomics and sound quality.
Nonetheless it might be an error because it has unexpected properties.