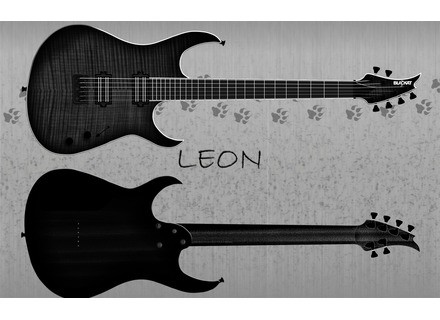 Blackat Leon
4
Guitar made in Poland and Skervesen up / finished by Blackat. Body and mahogany, maple, ebony fingerboard. Mechanical blocantes Grover, strapslock Dunlop Hipshot bridge. The pickups are Bare Knuckles choice. I opted for a pair of Black Hawk.

For the rest it is a guitar in the Ibanez line with a pitch of 25.5 ", a bolt-on neck, thin and fast, but I wanted with wood LP. It's been a nice mix.

Level finishing and assembly is not bad at all except for a pet on the table, which seems he deteriorated with the stress of transport. Nothing too bad, but it is a pity on a new guitar.

This is basically the construction of an Ibanez RG, with a really great handle, super fast. It is really nice to play, and light. My other guitar is an ESP Eclipse II which is not yet very heavy, and the difference is obvious.

Access to acute is OK but not as good as with a neck-through, obviously.

My only regret cutting for the right arm would have benefited from being more candid.

The customer has the choice of wood and microphones, it can be difficult to compare 2 Leon. In my case the couple mahogany + BKP Black Hawk is quite fat, which is a fairly significant difference against my other guitar equipped with active pickups sharper. It requires me to see my game, which is not necessarily worse. The BKP sound much fuller, it's nice. FYI, I play metal principelement the 80s.

So apart from the sharp edge that I lack a little on the palm mutes especially clean sounds are really good and are good surprise of this guitar. For cons, the gains between the two is not his specialty.

I'm pretty happy, but I plan to test other microphones in the future.

My overall opinion is in 2 parts.

First, the guitar. A very good guitar, built according to my specifications, the price of a guitar with tonal production. Sincerely it meets all the requirements of a very good guitar, no complaints on this subject.

On the other hand there has been the relationship Blackat. If Tom is always very polite, the contact is often very difficult to establish due to lack of response from him. There was also an error in the finish (I must have a blackburst on the table, it is missing) and pet ... These 2 cases were resolved by a discount on the price of the guitar, but it is very unfortunate; especially having waited 1 year (instead of three months announced ...).

Briefly, Blackat guitars are really good guitars, but be careful when buying. I bought live with no representative in the country where I live now, I think it would be wise to go through an official in the future. Or take a chance.

My ratings punishes the guitar itself and not the manufacturer, but it is one thing to know anyway.