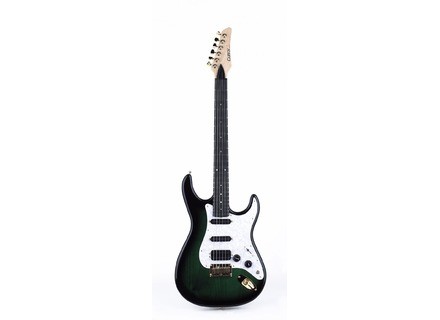 Carvin Bolt
4
$683.99 from Carvin direct. I bought it sight unseen after playing 20-30 American and Mexican Strats in various area music stores and being appalled at their "play-ability" for the money. Also, Carvin was willing to make one to MY specification, including a custom finish. No more, "well, I SORTA like the color on that one."

The neck was beautiful. It was set down to 1/16", with no buzzing and no dead spots. The pick-ups were solid-I ordered a hot humbucker in the bridge position, and it was fat, fat, FAT. The single coils in the center and neck positions were very good. Warm tone, minimal noise.

It had 3 problems-a bad volume pot (it would not turn all the way down), a loose switch, and a rattle behind the truss rod cover (probably a rogue screw). I also didn't fall in love with the finish. I ordered a flamed maple top with what Carvin calls a "blueburst," but it had far more black than blue. So, I sent it back-and they took it (even paid for the shipping), no questions asked. They cheerfully filled my order for a new one, this time in a lighter shade of blue.

The wood was gorgeous-and the neck, including the joint, was first rate. The guitar felt very solid and had "singing" sustain. The combination of a hard rock maple neck, alder under-body, and 1/2" flamed maple cap was very musical. It's unfortunate that the electronics were not inspected completely, and that is something that should have been caught before it left the factory.

After playing the Carvin, there is no way I'd pay a grand (or more) for an American Fender Stratocaster. Without exception, all the Strats I played were much less musical, much less "playable," and, in some cases depending on options (the "Fat Strat," for example), a total rip-off. In fact, I might argue that there is very little difference between the fit, finish, and feel of a modern strat and the Yamaha P112 I let me son abuse (in my opinion, the only thing that sets them apart from the Asian copies are the electronics). The Carvin, on the other hand, was a gorgeously crafted instrument. It looked amazing, felt musical, and had the best neck I have ever played (and I've owned at least 50 guitars in my lifetime). I hope they get the quality control issues right on the next one. For this review, given that I had to send it back, it gets only 4 stars (I'd have given most of the Strats I played 1 or 2 stars). With no build issues, this is undoubtably, given its price to performance ration, a 5 star guitar.

Carvin Bolt
4
Carvin has been one of the leaders in making semi-custom guitars that are affordable for musicians all around the world. The BOLT model is probably one of their lesser known models, but it's a great guitar. There are tons of features you can add to it, but the one I played had the following:

Carvin does a wonderful job at making their guitars. The neck on this is very comfortable. It's not too thin, and it's not too thick. The 12'' radius helps out a lot for achieving low action, and the fretwork on this was pretty good, especially considering the price. The finish on the back of the neck was absolutely killer. I'm a big fan of oiled necks vs the regular gloss/satin stuff. The neck joint on this model also had a very nice cutaway similar to that of the current production American Fenders and ESP guitars. It makes it easier to get up to the higher frets without that annoying joint in the way. The Wilkinson tremolo was the icing on the cake.

This is where Carvins are a bit iffy. The guitar came with three single coils, but they were all the standard Carvin production model singles. The seem to be a bit sterile sounding. I'm not sure if it was the combination of the wood or the way the pickups are, but they didn't seem to have that awesome single coil vibe that so many other higher quality singles have. That's not to say they sound bad. They sound pretty good, but I just wish they sounded better.

Given the price of these, it's surprising more people don't play them. It's sad to see the horrible resale value the guitars have, but that makes it better for those who want to buy them used. I recommend scoping out eBay for the best deal on one. I'd definitely take this over a normal production Fender any day. It's better in nearly every single way.

See all 5 photos of Carvin Bolt »