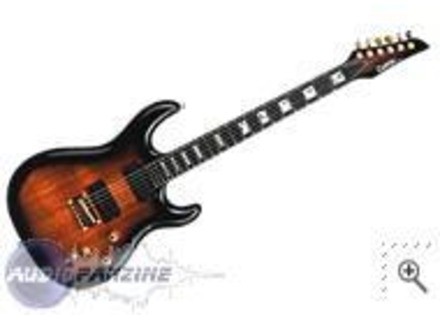 All-black (body, neck [ebony is standard fretboard wood on this model -- very nice], headstock, hardware) except for the neck dots -- the "Darth Vader" of axes! One understated, yet mean looking mother of a guitar! And that's just the cosmetics. The action is low and fast with no buzz from the locking nut to the last (24th) fret. Ergonomically, the guitar feels great (see my comments on its relatively light weight below) and balances well when played with a strap. Very versatile range of sounds since you can split the humbuckers -- can play all-out metal to match its looks, or warm and full for the tastiest of blues jams! Carvin's stock pick-ups are absolutely first-rate. You can truly see, hear and otherwise tell that every aspect of the guitar was well conceived, and that the particular strengths and nuances of the chosen components were factored into, not shoehorned into the design. Nothing about this guitar seems arbitrary or compromised.

Truly no meaningful complaints about the guitar itself. Aesthetically, if I had to nitpick, I felt that the spindly looking toggle switch that controls pick-up selection seemed underwhelming considering the prey-cat, powerful yet sleek look and feel of the rest of the guitar. Yet when you actually use the switch, it feels butter-smooth and solid -- a nice complement to the equally high-quality tone and volume pots. I could fatten up the switch with a coat of black handle grip dip, but anyone who's played a Carvin knows that the switches are fine as is. Other than that, the hardshell Carvin case that came with the guitar could benefit from a thicker outer plastic shell since the surface has become concave. However, the case's overall integrity remains solid.

Neck is straight and true, and the neck-through-body construction makes the guitar feel like it's cut from a single piece of wood. The guitar is lightweight (relative to a Stratocaster, let alone a Les Paul), yet feels more solid than either of the two venerable models I just mentioned. I own a beautiful HSS American Strat (my brother owns the Les Paul), and all I can say is, if you hold each of the three guitars one after the other, you can simply FEEL the structural superiority of the DC127. The electronics are butter smooth and tolerance tight. Despite the fact that I bought the guitar used, and the previous owner certainly played it and didn't baby it (judging by the condition of the case which I detailed above), the finish to the body remains near flawless despite a few pin-prick size dings and some pick swirl marks which I'll polish out.

I agree with other user and professional reviewers who marvel at how Carvin can produce such quality instruments offered at price points necessarily low to maintain some market share. My Strat HSS w/Sienna sunburst cost me $900 new in mid-2004 -- haggled like crazy with the boys at Guitar Center to get that price. To me that was quite a bargain (came with a hard-shell Fender case) then and now for a U.S. Strat of that quality. Yet this is approximately what one would have to pay for a new version of the blacked-out DC127 (as of Feb. 2005). I've not played any PRS guitars, but for the premium you'd pay for PRS over Carvin, I don't see how you could arrive at a cost benefit unless a PRS simply feels and/or sounds better to you. I've not seen any meaningful boasts that PRS' quality outshines Carvin's, so given the price difference, I don't see how it's justifiable for the vast majority of guitarists to pick PRS over Carvin. So here's the upshot. Considering that the DC127 is completely custom built and equals or outshines my Strat in playability, construction quality and flat-out value, I'd encourage anyone looking for a new electric guitar to visit Carvin's website (www.carvin.com) and create a profile of his/her dream guitar. When you sit back drooling at the virtual axe you've built, then get the price, I'm sure you'll have a hard time not following through on the order!

The neck-thru design gives wonderful sustain and effortless access to the high frets. The active controls are very powerful and help you acheive many tones. The wilkinson trem and sperzel tuners are top notch.

You can customize any guitar that you order from the factory, and it only takes two months for them to build it for you.

Not much to dislike. My only hangup is that there are so many controls that it detracts from the beauty of the instrument. They should put some of the switches into push/pull pots. I'm ordering a new one with passive controls.

Excellent construction. Quality is outstanding. A wonderful USA made product.

I have continued to search for the perfect guitar. Every time I come home from the guitar store, I am more in love with this instrument.

Great guitar, very well made from finish to setup!

The neck is a great neck, very thin and flat. Not super thin however, not like a ibanez wizard, but it has it's own thing going on and may or may not need some time getting used to. It's generally very flat and very wide.


It's your basic super strat, very simple and even simple looking too shape-wise. No frills. Just plug in and play type. The neck is amazingly comfortable especially to reach up to the higher frets, it feels smooth and comfortable goin up with no problems whatsoever.

The design of the guitar as previously said is like a super strat, so it has the proper contours on the back and the forearm to be comfortable to play for long periods of time.

I bought this guitar used and so it came with duncan pickups which are trustworthy and almost always have a reliable sound.

The locking tuners are easy to use too, requires less turns and thus helps you string up faster! And would help stay in tune if you had a trem, but this one doesn't, it's more just a piece of mind thing and also to string up faster.

This one had duncan JBs which I am very familiar with and sound great with this guitar. The DC127 to me has always seemed to be like a shred guitar, and the JB pickups are perfect for that.

I did eventually change this to EMGs for kicks and it also sounded great!

You can't really go wrong with a guitar with these specs as it's basically the same as most strat-like guitars out there and will always sound great given the right circumstances. Even the carvin pickups apparently sound really good and are also hella tweakable as i've seen each of the pole pieces are adjustable to adjust for each string. A little bit overboard in my opinion, but the option's there for the tweaker!

Great guitar for the money to buy used. I don't really know why their used value is so low compared to the new prices but the guitar itself is amazingly well built. Everything is quality parts and their guitars are solid. I guess maybe there are just so many strat/super strat guitar companies out there and this one just didn't seem to take off completely.

But if you're looking for a super strat, a simple type with good quality parts, good pickups and a great neck and aren't necessarily brand conscience. Look at Carvins!!
Did you find this review helpful?yesno
»

Carvin DC127
5
Carvin has been hand making guitars in the USA for 30 years. Every guitar they make is made to order and sold directly by them. There is no middle man when it comes to Carvin guitars and this allows them to give everyone factory direct prices. They save the cost of selling to suppliers and pass the savings on to the customer. The customer is able to customize any part of their guitar and get any kind of wood or electronics configuration they want. The DC127 was introduced in 1990 and is Carvins most popular model. You can get pretty much any wood you want with this guitar but the standard options are still great. Standard the DC127 comes with an alder body with a maple neck through design. The neck comes standard with a ebony fretboard with the 25 inch Carvin scale. The model I tested had a tune-o-matic string through bridge although you can get a Wilkinson or Fender style hardtail or even a Floyd Rose. I even hear now that you can get a Bigsby. The guitar comes with C22 pickups and they can be split with a push pull pot. The guitar has a master volume and tone knob with a 5 way switcher.

The playability on the DC Carvins is great. The neck through construction means that you have no neck joint heel. The cutaways are deep and you can easily reach up into the highest frets. The neck radius and fret size and material are all selected by the user. You can have a fretless wonder Gibson fretboard or a super flat fretboard with extra jumbo stainless steel frets. It is all up to you. One thing that I have noticed with Carvins is that when you select the option for the Floyd Rose the option of a locking nut is not automatically selected. I have seen many useless Carvins for sale second hand because the original purchaser forgot to select a locking nut with their Floyd Rose.

The Carvin pickups are pretty basic. They are good for light to moderate gain and blues or jazz. They are super clear but do not have much output to them. The pickups seemed to be voiced more for jazz or classic rock than hard rock and metal. You can get nice smooth sounds from the neck position and even jazzy tones. The bridge position is pretty weak. For heavy music I would recommend changing out at least the bridge pickup. For this type of guitar I would probably drop in a Seymour Duncan custom or something similar to that. Just changing out one pickup wouldnt really call for a active EMG to be dropped in.

Not many people think about Carvin when they think of a high end custom guitar but these guitars are some of the best out there. Carvin is a small American company that does everything in house and cuts out the middle man. Once you get a guitar from the factory through the wholeseller and to the vendor you have added on a few hundred dollars to the price in most cases. This you are buying these guitars staright from Carvin you are saving a lot of money and getting exactly what you want.
Did you find this review helpful?yesno
»
Read the 8 user reviews on the Carvin DC127 »