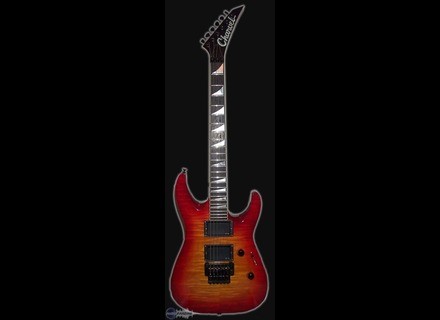 Charvel 750 xl soloist archtop
4
The guitar I owned was made in Japan during one production year in 1989. Here are some specs:

This model is the Japanese made equivalent to the USA Jackson Soloists, so it goes without saying that access to the upper frets is great. This guitar is great for lead and regular guitar playing.
It is easy to get a wide array of sounds with the two humbuckers and 5-way switch.
It is a very well designed guitar, the neck thickness starts at .750 at the first fret and goes to 2.5 at the 21st fret.
Being mahogany and maple, the guitar does have some weight but it is very well balanced.

I bought this when I was in high school - around age 16-17 and what a killer, near top of the line guitar it was for that time! Unfortunately, I wasn't into amplifiers and only had a crappy 15 watt Washburn sx-12 practice amp and a few different practice amps at the guitar shop where I took lessons. Then down the road I got a Laney linebacker 50 watt solid state combo, a decent upgrade then and it still sounded nice. So, as undeveloped as my ear was then it sounded great. Great chunky rhythm tones with superb singing leads (from what I can remember). It sounded great distorted and clean. It was my #1 guitar for the next four years until I put it into storage as I moved to a bigger university then on to grad school.
Fast forward 15 years later when I pulled it out of my mother's basement. My ear and playing style had developed to a whole new level. I played it with some "real amplifiers" and 4x12 cabs.
The pickups were terrible - dull and lifeless. The guitar sounded very sterile due to the stock pickups, nothing like I remembered a long time ago.
Chavel really did a disservice to this guitar with the junky pickups they used with these great guitars. I was getting into Suhr guitars then, so I decided to keep the guitar stock for resale purposes and didn't change any pickups to see what this guitar really could have done.
These guitars have all the potential in the world - they just need some better pickups. So, I'll give the sound a 6 for that.

Like I stated before, the 750 XL has all the potential in the world. It is made of great materials and has excellent craftmanship and is great in many ways - but the pickups really should be changed/updated. So, I like the pickups the least. I like the looks and playability of it the best. The value for the price was fantastic and they have held their value on the used market.
In the years it was in storage, I bought and sold many guitars as a hobby, so I have a lot of experience with other guitar brands and models.
Knowing what I know now, I would have bought it again and probably looked to get a few more and would have changed the pickups out. In the end, I did sell this as I started playing guitars with ss frets - but with the right pickups this is one great guitar.