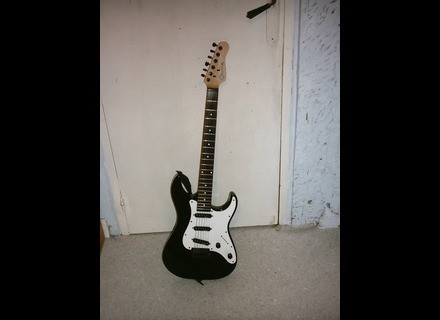 As13's review (This content has been automatically translated from French)

The handle is very nice, thin and glides well. Compared to an old SG, the neck is a little late, better limit, almost like a Start, a Jackson thinner but slips less. The strings are very close to the handle, very convenient. The last frets are a little tight but it's widely playable, after the 20-21-22 to juggle, it's still pretty raide.La guitar is very well balanced and fits perfectly on the belly. This guitar is relatively light. This gives a good sound easy, but I will detail in the point below.

Very versatile guitar, this is the exact mixture of a jackson (wood body, mics ...) and a stratum (shape, round, vintage vibrato ...). Its crystal clean well, with the neck pickup a real treat, and care we do not expect it with microphones simple, sacred potato in distortion with the bridge pickup! It remains saturated, beautiful grain, its relatively large (well above the average of the single microphones!).
I love the clean round in the distortion in the bridge, and crunches for the coupling of the middle and the bridge, which reminds me of the little crunch of AC / DC.
Its beyond me as well its a jackson js 30 warrior for grain, an esp ex 50 for the grain again, and an Ibanez Ergodyne 600 euros for grain, and potatoes! and then other cheaper qques which the comparison speaks for itself. In clean, she heads lynched by far!
Biggest negative is that once pushed the sound, that feedback from everywhere mm away from the amp, unlike other guitars I've experienced on my amp.
I play on an AD15VT (no difference with another skyscraper near the fault in the amp that sounds great though) and a bandit 112 above, and then slams it over already! Mm and with this amp, the clean is widely audible, which is not true when I play it a js 30 ac or another!

I have been using qques years and I've never found mauvaise.Je have been used, so it was a very good value prix.Je have paid 165 euros, but by typing it in across the luthier (knobs, bridge, frets to repeat ...)
In the end it's worth every penny!
I would do this choice because it is a great guitar, and has the merit of being unique!
Did you find this review helpful?yesno
»

kiki69's review (This content has been automatically translated from French)

Charvel CHS1
5
Characteristics have been well presented previously. To add (a little), I think it's a Korean guitar.
The mechanical stamped "Jackson" do not move. In addition, it is very easy to tune.
Some details are a little cheap, 1-ply pickguard, plate springs vibrato style "piece of plastic." I mean it in relation to detail the qualities of the beast.

The neck is very thin. For small hands, it is very nice. For the logs, I think it should be limited. I spent the linseed oil and it slides perfectly. It is not painted (or so it's quiet ...)
The string action is really low, hence the value of having a well tuned guitar (I will return).
I sometimes use a capo. The guitar does not Disagree as we change places. As the handle is fine, we can move easily.
The last frets are a little tight, but I used very little.

Ben, I have no real style. I (almost) everything. It suits me perfectly in the registry that I give. Neck pickup, the sound is clear, the notes really stand out. Arpeggios or flat picking is enjoyable. For something more hairy, I use the microphone of the environment. It snaps, it's crunchy. I play two amps modeling of low-power (micro cube and Fender GDEC) in simulation rather soft. There's really happy. No problems or other feedback. For big sound, I change my guitar. Even if it does pickup, compared to an Ibanez (RGT42) or a Gibson ...

I use it for over a year. For now, it's my favorite. There is nothing I dislike. I have several different models, but I always come back to it. I bought it by chance on ebay. I did not pay very dear, but it's for a walk in the luthier: recovery of the handle, Planing frets, adjust the string height. Without this work, the action is much higher, and closer to more low-end guitars.
It's really a great guitar. For now, if I could keep one, it would be this one.
Did you find this review helpful?yesno
»