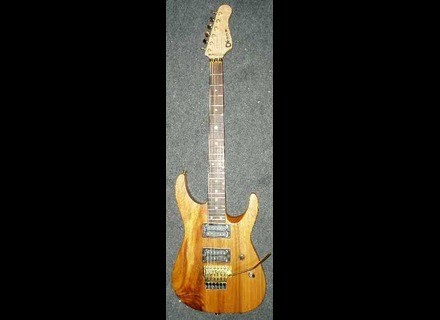 Charvel San Dimas I - Koa
4
Charvel is my absolute favorite guitars in the world. They are simple, accurate and just a hot rodded tone. These guitars have been a round now over 30+ years and have been in the hands of many guitarist. These guitars has been through the ringer though. They started out as basically superstrats and have changed hands a few times over the years. Now they are owned by Fender who has now done a fantastic job of recreating the way these guitars should be built and the way they should be played.

This guitar is made from the Koa wood which is considered an exotic wood. The wood has a beautiful pattern and an elegant wood grain. Though many people love the way Koa looks many people love the way it sounds as well. It has a softer attack sound which is not my favorite. The tone comes off more subtle and less in your face. It is more softer than an alder wood or an ash wood. It is absolutely distinct Koa and you cannot dial that tone out.

I have to say that I am not really a fan of the tone that Koa produces. Though it is beautiful to look at and the wood grain and quality are top notch. The tone is something that is just not a taste of mine. Many people will like it but I think a Charvel lover will probably not dig it too much. Most Charvel lovers out there are used to the tone of an alder body which most Charvels were built out of. So the softer attack and feel of the Koa will not be appealing to the aggressive player which most Charvel user probably would be.

They are looking for that pissed off sleazy tone that many of the 80's metal guys gravitated towards. So many favorite players used Charvel guitars in the 80's and most of them were constructed out of he alder body and the maple necks. Sometimes you would see a rosewood figure board but nothing to out of the ordinary. So this Koa guitar might not appeal to the Charvel purist.

At new these guitars come in at around $2400, which isn't a bad price for the wood itself. May other guitar manufacturers produce guitars that feature Koa and charge twice this much. That is another reason I love Charvel is the price cannot be beat for these slick guitars.

I would recommend this guitar to someone who first loves Koa wood and second wants to get into a Charvel. The Charvel purist is not going to dig this guitar as much and will most likely pass on it like I have.
Did you find this review helpful?yesno
»

See all 8 photos of Charvel San Dimas I - Koa »