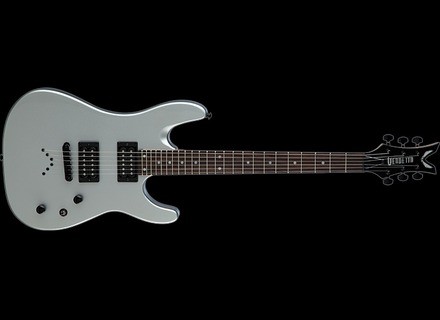 Dean Guitars Vendetta XM
4
This guitar is the lightest weight solid body electric I have ever played, (since 1966). It is a nice matte natural finish on the body and the neck - the exception being the headstock which is glossy black with the Dean wings logo inlayed under the clear coat.

I play blues/rock/country and everything else that has melody. Not a big hip/hop fan.

It hangs well on your body, weighs almost nothing and is highly playable. I like the rich medium mahogany stain on the body and the satin finish on the the whole guitar. The sound through a 'dry' amp is very good considering it has the low ball pickups and other electrical components. I do most of my testing of guitars with a dry signal because if it doesn't sound good naturally it will be worse with distortion and effects added. The pickups provided a very good level of equality in signal strength for each string, unlike some that have a bias for one or more strings over the others. It doesn't feel like an inexpensive guitar and it plays a lot better than the price indicates. This thing even sounds good unplugged - due to the Paulowina body and maple neck it doesn't absorb the sound of the strings like heavier woods and the maple neck gives it that ability to sound clean and clear. This would be a good starting point as a test bed for experimentation without having to trash a vintage instrument.

I wish they would have spent a little more money on the pots/switch/wiring and pickups. The stock setup is adequate for everyday use, but it would be better if they were higher quality. The body gives a good level of sustain, but I would have preferred the neck to be either a set neck type or a neck through design. The bridge and tuners could also be upgraded as they are of marginal quality, but sufficient for the job.

The body and neck joint are well fitted with no gaps or looseness. Except for the lower quality hardware this is well built, but the guitar is very playable even with the inexpensive components. Action and setup are great, the bending of strings in the upper register is quite easy to do. It is a good practice guitar, and if need be could be pressed into service if your main guitar suffers some horrible event.

Good for an entry-level guitar. It won't limit the younger players like others in this price range, sounds good and looks unusually well made for the money.

I am glad I got mine for $55.00, but I would not have found $100.00 too much for this guitar. For what it is, (an inexpensive but capable instrument), I will give this a 5. I've played a lot more expensive guitars that were not as good as this one, and some that were actually worse.

Dean Guitars Vendetta XM
3
I've played for over 20 years or so. This Dean Vendetta XM was a Xmas gift in 05. Don't expect much for $100 from a guitar, but this might work. As is, the tuning pegs are terrible. Black covered one. Does not help the strings stay in tune very well. Would upgrade to Grovers, Sperzels, etc. The pickups, stock, aren't great, either. I'd upgrade on the cheap in that area. The bridge is "ok"; will do for now. String thru body, so. 1 volume and 1 tone knob. 3 way selector switch. Ok. 24 fretboard. Rswd. Maple neck. Ok. Oil down the fretbd. The body is made of "Paulowia"(? WTF?)wood. Never have heard of it. It's very ltwgt. One of my strap pegs came out of the body; have filled with putty, and will redrill back.

Christmas Gift; from Musicians Friend, $100. Family got it for me.

It plays alright; the aforementioned upgrades would help. Good beg. guitar as is. I'm not a beginner, though. Oh well, it's the thought that counts.

Fair; good for a beginning player.

IF I do the mods, it'll be a kickaround guitar, one I can go clubbing with. As is, it stays in it's gig bag mostly. Same quality as a Squier or so. Sure, I'd get it for someone starting out. Move on as you get better, maybe for a higher end Dean. IMO...Peace out.

Dean Guitars Vendetta XM
5
Been playing forever, it seems. Guitar, then bass, then vox. Keys/Drums/Sound Recording in there, too. In between bands/projects. Tastes: Rock (various), Jazz, Blues, Country/Bluegrass, Soul/R&B/HipHop.

The tuners aren't great; covered tuners. Can upgrade to Grovers/Sperzels eventually. Better tuning stability. And the upper strap button has come out of the guitar, but this is due to the soft wood. Will fix myself.

Overall,fair to good. Some upgrades, and it'll be alright. Kinda disappointed the strap button came out/fell out. Some epoxy glue, and it'll be fine.

Decent first guitar or second/backup. COULD BE a main axe, but upgrade with at least Grovers, some decent pickups, and good strings. Overall, a good buy. It was a gift, so I have even less to complain about!! Go get one...

It's made from Paulowinia wood. Never heard of it. The veneer resembles, or is, mahogany/mahogany stained. 24 frets. Rosewood fretboard. Maple neck. One volume and one tone knob. 2 open coil humbuckers. Bridge with string thru body design. Plays/feels good. Comfortable and light weight. Sort of resembles/feels like the Schecter Omen6. But more less heavy.

The tuners, which are cheap. This is also a problem with the EVO XM, and other lower end Dean models. Too bad. Doesn't hold tune very well. Replace them.

Not bad overall, save for a few things. Strap buttons might come out; did on mine. A few adjustments, and it'll be ok. Out of the box, action wasn't too bad. I tweaked the truss rod on mine a little. Better now.

For $99.99, can't really complain. Make some upgrades, if you choose, and you'll like it. Otherwise, it's good. Recommended.

This review was originally published on http://www.musicgearreview.com
Did you find this review helpful?yesno
»
Read the 5 user reviews on the Dean Guitars Vendetta XM »