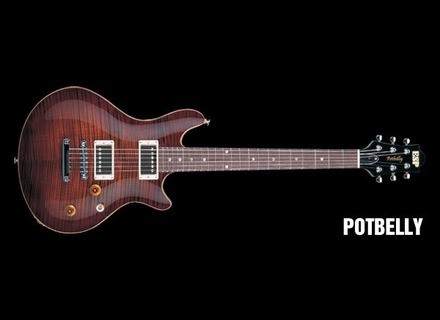 Potbelly, STC-Shaped Guitar from ESP in the Potbelly series.

ESP Potbelly
4
The Potbelly guitar is a guitar that ESP keeps on the overseas market. It's more of a PRS/Gibson style clone than anything else. It's meant for that thicker tone. The guitar features a mahogany body with a flame maple top, a mahogany set-in neck with a rosewood fretboard, 22 jumbo frets, dot inlays, a hard tail bridge, two humbuckers, one volume, one tone and a three way switch. I rated it down slightly because I'm not a huge fan of the overall shape itself, but it's more of a personal opinion than anything else.

The fretwork on this was top notch, without a doubt. The neck itself was broken in nicely, and it was like playing on a well worn guitar. The ends themselves were rounded perfectly, so there were no issues in that aspect. The nut was also cut perfectly. I didn't experience any of the standard tuning issues that Gibsons seem to be so prone of. The flame on this was very tight, and it really popped, even with this brown finish. The bookmatching was also great. The only complaint I have is that it's a hard tail model, but I'm more of a floyd guy.

This guitar had some Crunch Lab pickups installed in it. They're custom made by ESP themselves, and they're similar to the Duncans that normally come in these guitars. The bridge was sort of like an old school 59. It has that super fat and bubbly sound going on, but it was also high enough output to do metal without any problems at all. The neck was also like a 59, and you got a super fat neck tone with this thing. I really liked the neck for cleans and leads, and I loved the bridge for those super thick rhythm tones. It's a very versatile guitar considering that it only has two pickups.

If you're looking for some sort of PRS or Gibson alternative, this is worth checking out. It has that fatness that the Gibson and PRS guitars tend to have, but it has way better quality control and overall construction than them. It's more consistent, and it sounds great.
Did you find this review helpful?yesno
»