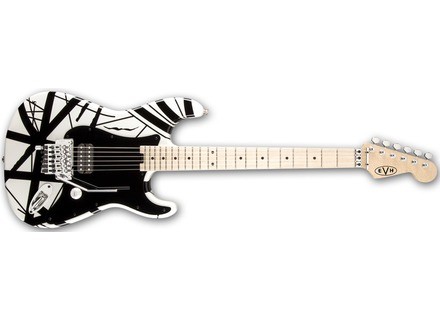 Striped, STC-Shaped Guitar from EVH in the Striped series.

View all offers for EVH Striped »

EVH Striped
4
Features: Please see on the net.
Note that the screws that hold the locking nut may be too long and should be shortened so that the "lock" can be done effectively.
Operation to have it done by the dealer, who certainly knows bp.

Channel truly successful, rather flat, but there is enough wood to not fall into the cliché of the handle base Shredder.
Lightness of the beast significant and proven ergonomics.

If found instantly and in a rather convincing (see disturbing) the sound of Eddie, the micro side naturally has a "Dark" which may displease some (and please others ... obviously).
A try on his own stuff so to get an idea.

Violin level, this guitar is fun, it is alive and well!
Must buy it for what it is:
a mythical model can greatly facilitate your job to take out the "brown sound" while offering superior playability ... not expect it offers a traditional Strat sound, it is no longer really.

chouli's review (This content has been automatically translated from French)" Bomb"

The handle is really great ... great slipped and is well in hand. The hoop is excellent and the truss rod is at the bottom of the handle without the need to disassemble or remove the strings (trussrod to Musicman)
The guitar is light really well finished very little to complain about if it is only out of the box D-Tuna was not settled and went down to the table. So I placed a hold on to Dive Only and since this is nirvana.
Volume control (warning TONE is registered but is a VOLUME control!) Is said low friction and allows a swipe of the finger to control the volume without effort, really great.

Clear sounds are really evolving as long as you play with the volume control and the volume of the amp and you can get a crunch sound quite easily.
In distortion, bah there is simple, it is the best humbucker I know Wolfgang is monstrous (though I know the EMG 81 and 60 and Seymour Duncan). Harmonics fuse almost all alone, the output level is enormous.
D-Tuna toggles between standard tuning in drop D in less than a second.
A treat

I use it for two months. I took this guitar to replace an Ibanez Herman Li and today it is the one I use the most.
The sound is perfect and is not confined to the metal 80.
The value for money is excellent
FYI a U-tube test where you can see the beast in action:

EVH Striped
5
In short, the detail will be seen below:
Strat shape, 1 humbucker, 1 volume, pink floyd, plain maple neck with rosewood reported maple jumbo frets, mechanical oil bath, delivered in cardboard, all made in Mexico by Fender with a look that takes us directly into the first half of the 80 days when dominated supreme Mr Eddie Van Halen.

With EVH Striped, it is violin side in an intermediate level above and below the Korean luxurious quality of U.S. Peavey. The carton made in mexico reminds us!

Here not luxurious but equally effective wood crate linden (basswood) which we can not discern in the paint if it is 2 or 3 parts. This allows in any case clear that the painting is done in the same way as the original, that is to say, painted with several layers of masking tape. It&#39;s beautiful when you see the real guitar (pictures net does not highlight). The paint job is done remarkably, the first good point.

The guitar is very light, which is reassuring with linden (lime has a different density depending on its origin and is sometimes found with fairly heavy guitars on unselected basswoods).

The handle to the compound radius maple 12-16 inches is quatershawn (cut out area), I&#39;ve seen the most beautiful quatershawn visually but it&#39;s still better than the standard maple cutting. It is in two parts, the key is maple reported, what with the two carbon reinforcements ensures good resistance to climate change and compensates for the fact that it is not painted.

His profile is flatter than the back EVH peavey but still keeps the material, which distinguishes it from other shredders sleeves Ibanez prestige style. The sides of the handle are rounded as on old strats, which is definitely a plus for this style of sleeve. So anything is possible, but also blues pyrotechnic game with the thumb on top, that&#39;s good. But be careful, the handle is plain, that is to say, unvarnished and sometimes deserve a little bit of sandpaper in 2000 and a lemon oil passage for the preserve. In 1 hour, I had marked the key, but this is normal when it is not varnished.

Anyway, finish level without having to deal with rare woods, it suffers no reproach.


Vibrato is an original Pink Floyd based on the body with the EVH logo to please Eddie (says Mr Pink Floyd himself) and finished with D-tuner to pass the low E in D in less than a second. It would like the agreement to wonder, it sounds great (thank you vibrato brass block). Is this really the original floyd made in germany or one made in Asia? If it is the same as Wolfgang, Mr. Pink Floyd himself guarantee that it is the original floyd. At least for me, it works and sounds just fine.


Electronics: a volume knob (marked tone) EVH brand (manufactured by Bourns) said low friction: it turns almost alone and can raise or lower the volume in a fraction of a second.

The micro EVH is great, it has a good level of output that allows it to saturate easily and is quite open and airy (spectrum with very good bass and great harmonics) and reacts superbly volume.
It&#39;s pretty rare to get beautiful clean tones turning down the volume on a humbucker
THIS IS THE SON VAN HALEN and for me one of the best doubles I know.
For now I use it mostly with an old head Marshall Jmp 2204 and for more modern sounds my old 5150.

Well no, perfection is not of this world. Already because the guitar deserves a good set once out of the box:

The handle was very well resolved and did not move while having undergone differences in temperature and humidity important for 1 month (thank you the carbon reinforcements) but against the action was worthy of a cheap Chinese guitar that is to say, the ropes 3 mm of the neck.

After the overthrow of the handle adjusted correctly by placing a hold of the thickness of a business card in half the handle, and a small height adjustment Floyd, let&#39;s go for a war machine. Except now I still have two frets to allow me to adjust specific bends in the 18th box. My luthier will do. I note though that the settings I made in terms of height of the strings are very low (1mm at the 12th fret bass and treble) to promote a game to Van Halen, but this is not a guitar made for that?

So almost without fault, a great quality but still in short of Peavey Wolfgang étaitent really a top level violin (but 4-5 times more expensive too). on the other hand in sound and taking hand, I prefer the EVH striped, which sounds much more direct.

And when you look at the price paid for the EVH: 589 euros for me, you say for once that this is a guitar that should be sold twice and it would still be a bargain!

[NAMM][VIDEO] The EVH Striped is back

Published on 01/27/13
Van Halen and his Frankenstrat fans will soon find in their favorite guitar stores the new EVH Striped series introduced at NAMM 2013.

View all 4 videos of EVH Striped »