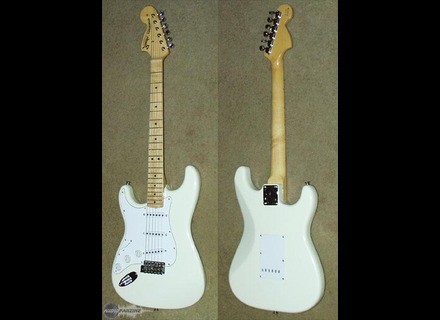 petit professeur's review (This content has been automatically translated from French)

Fender Jimi Hendrix Stratocaster
5
United States, Made in 1997, a copy of such strat end 60 that used by Hendrix Monterey
Maple neck button brings in stocky, rounder that handles current
It is left up a guitar in right, for right-handers who want to emulate their idol!

The handle is terrible, the sound also

Can sound at the same time both a soft, crystalline and deep, like a good Start

I bought this model for use in left-handed, because I'm left handed!
I did turn the nut and the strings, Youth and roll!
At the price I paid used, fortunately it is perfect!

benjamjudo's review (This content has been automatically translated from French)

The handle is very pleasant varnished
4couche polish ...
the drag is very smooth
I tried several before Fender Stratocaster Jimi Hendrix bought me the model and the only one whose handle my Repport conquered by the bend and slid ...
I do cone pa weight but once used it is light ...
There is only one true defauld is that CCAA is almost impossible to treble from the 18th box but good if you have a great hand it can alé ... Of course if one is right ... But if a left buy it for the left back to be good ...
9.5

They are ideally suited to my style of music: pop, rock, hard rock style: Jimi Hendrix, scorpion, Cream, Led Zepelin etc ...
I play with a fender 15w but I'm going to buy an all-tube Peavey Classic 30 ...
ON optenire can bend on the 15th case of acute bend super distortion in the sound ... is hot ...
and the clean sound is perfect but when you are against the clean sound better now it is not acute in micro meter you have to micro meter in serious ...
I love the disto ...
before I do not like the clean sound but when I got this guitar I ComenC increasingly played avec.pour to play funk and its going REAGE convenire ...

1year from the User I what I like most is its sound and style (left is to right)
I especially like the color and grossse coat of varnish on the handle.
I tried several models gibson sg and also the Fender Stratocaster and the cele quee I tried I fell in love it was perfect for my style ...
Raport money is perfect ...
What I like least is its access to the acute box from the 18th ...