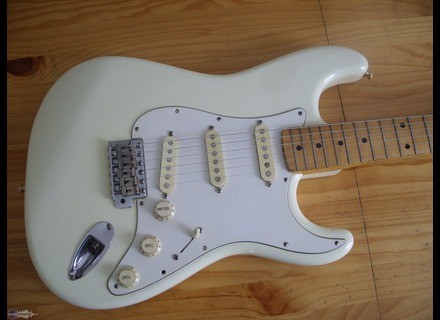 
If you've ever played Fender Stratocaster then you know exactly what you're to get with this guitar. You have three single coil pickup with a volume control knob and two tone control knobs. You also get a five way pickup selector and that's pretty much about it as far as features go. In addition to that you do have a tremolo system which allows you get this nice vibrato tones. This guitar features a blue paint job with a cool rose wood fretboard.


The Fender stratocaster tone is just as solid tone that's really built for any type of music. These are very versatile guitars and the playability factor is what stands out with these instruments. These are one of the most favorable guitars in existence because of the overall tone and balance. They work well with any amplifier or effects pedals board or racks that you might half. They go with pretty much any style of music.


At new you can find these guitars for little less than a US built Fender Stratocaster guitar. Overall if you're looking for a great instrument that's going to be extremely versatile and very well-built and have a great feel then this is a great guitar to own. They're a little bit cheaper if you can find them compared to the US built but in my opinion I would much rather just have a US built Fender Stratocaster and pay a couple hundred extra dollars for it.
Did you find this review helpful?yesno
»

Fender Stratocaster Japan
4
This is an old school Fender CIJ guitar that made its way into our store. It's not often that you see these guitars as they tend to be only for the Japanese market, but in the past, you could buy them from stores like Ikebe-Gakki and Ishibashi without much of a problem. I'm not sure if they still sell directly like they used to, but you can still get them through various shipping companies. The guitar had an alder body, a maple neck with a rosewood fretboard, 21 frets, dot inlays, a Schaller floyd rose, three single coils, one volume, two tones and a five way switch.

This guitar had been modded for a Schaller Floyd Rose. This is just a guess, but I almost think this guitar was bought directly from a Japanese auction site. I seem to recall seeing this exact same guitar being sold awhile back with the same floyd equipped on it. The Japanese really like their floyds on their strats, and you see a lot of them with this modification. The Schaller floyd is a very high quality floyd. This was the lower profile kind of model with the shorter screws that Jackson in Japan and Caparison utilize. The fretwork on the guitar was good, but there was some fairly strong wear going on. The rest of the guitar was pretty good, though.

This had three Seymour Duncan Quarter Pounders installed in it, and they were pretty noisy. The guitar almost had a Ritchie Blackmore vibe going on, so I think the guy was a fan of him. Anyway, the bridge was very high output, and you could get a pretty cool metal tone with this. It wasn't super tight, but it handled high gain well enough. The middle pickup was pretty useless to me, and I didn't even care for it that much when it came to mixing it with the neck or bridge. The neck was great for leads, as it was very powerful. I could get a pretty cool legato sound going on without too much effort. Cleans were a bit bland, though.

This guitar had a lot of mods done to it, so it's hard to say exactly how good these guitars are, but judging from my previous experience with the MIJ/CIJ guitars, I'd say you shouldn't have too much of an issue if you decide to buy blind. They're high quality guitars for the price.

Fender Stratocaster Japan
5
crafted japan, that is to say in japan assembly (manufacturing us)
my guitar is equipped with a microphone set us

is a strato finely crafted, very good for me intrusment while comparable to one hundred percent american strats but half as expensive

ultra versatile guitar for all types of amplifiers, the fact ca ...

I use it in spare (backup) on stage but also as a studio when I need a sound fenderien
2 times cheaper than American, more and more rare to find on the market, replaced by series of mexico, which for me are a notch below the serie japan (violin finish)
I would do the choice of Acquisition of this model without hesitation if the need to have a good strat it was felt

rhcpfan's review (This content has been automatically translated from French)

Operation is simple and easy, good ergonomics, fender japan have very good reputation and it is justified.

Fits a wider range: jazz blues fusion.après more violent until I think it should not do it!

A very good value for money which is why Fender stopped production of the famous models who strat US shade! Start = versatility.
good choice!
Did you find this review helpful?yesno
»
Read the 10 user reviews on the Fender Stratocaster Japan »