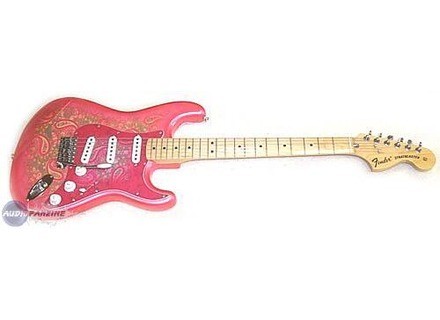 doctor.frog's review (This content has been automatically translated from French)

Fender Stratocaster Paisley Reissue
5
Japanese, it's a sublime scratches that I've had 88. I am completely in love voil. Do not change the comrades microphones. All ages extraordinarily well. Its sublime.Voil is tt

Big stick, one less box that us

Since 88 is his strange look I got a little lass. I had two three skyscrapers, I'm the one I even sold my Gibson lespauls Standard (no, I'm not crazy) it is to say
Did you find this review helpful?yesno
»

Soulboogaloo's review (This content has been automatically translated from French)

It's a Start, it's - say A model of comfort, ergonomics and ease of play to say anything more ...

Sounds typical of a stratum. Closer to the Hendrix (in saturated or Knopfler (light) than that of SR Vaughan, for example.
The microphone is a bit sharp too aggressive.
Played on a Peavey Classic 30 All Tube, it's a real rgal ...
However, when I grow up, and I sub, I think I will offer him Kinman pickups ...

Beatings and pain ... Most of my friends are a little frightened at his warbling a beautiful pink, with patterns cashmere. I, on the contrary, that given me the favorite for the scratching! I have since 1995, and I'm always much love ...
For the same price, I could have a Standard US, yet just to finish, I took a Jap ...
Incidentally, a specially mention for finishing and the quality of manufacture, at least as good as the USD.
If c'tait again, I think I plunged back ...
Did you find this review helpful?yesno
»