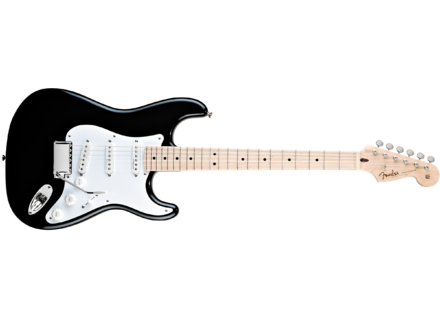 Fender Eric Clapton Signature Stratocaster
5
I've played guitar for 41 years. I'm a lead guitarist and lead singer, but don't mind playing rhythm to help the band out. I was in a Country Western band about 8 years ago which was fun, doing Top 40 C/W. I've played the blues in bars, which is great fun, and consider myself a bluesman first. I'm a songwriter and I've recorded demos of about 100 of my songs for publication/albums in the future. I play primarily in church now, keeping my chops up, 20 years of that so far! But when I retire in a few years I plan to perform locally and/or as far as it will take me.

Bought it new in 1994 for $1,131 at Jensen's Music in Santa Barbara. I read about this guitar in guitar magazines, and heard/saw Eric Clapton play it on his albums and on films of his concerts. The sound was to die for! I needed a FAT sound for playing lead, and this baby really sounded fantastic. I wanted a fat sound and great tone without having to play so loud your eardrums got popped. This guitar more than delivered just that.

This guitar is so "playable" and the range of tones you can get from it is really incredible. It's like "buttah". It feels like it's part of you since it's so easy to play. The active midrange boost is what does that, and it's really something. Plus those amazing Gold Lace Pickups. I don't think you can get a fatter tone from any other guitar. The compression knob is also very nice. If you find the midrange is tending to muddy, you can turn up the compression and make your tone sharp and clear. It cuts through anything else in the band but never in a rude way. I'd say, as much as it roars, it's really a gentleman's guitar because it's so smooth. And you never get tired of playing it for those 4 hour gigs because it's so lightweight. Whereas a Les Paul will put a crick in your neck since they weigh a ton!

Right after I got it, the lacquer on the fretboard scaled off in a couple of spots. I never had it refinished, but plan to soon. I have to admit, that as good as the sound is, there are elements of cheapness to it. The tuning knobs are encrusted with something white because they're not treated to prevent whatever chemical reaction that caused it. And I really couldn't stand the cheap looking, thin, plain white pick guard. So I replaced it myself with a gorgeous white/pearlized pick guard which really makes it look classy. My guitar is that gorgeous green, and looks sharp with the pick guard I put on it.

I'd say the construction is lacking. If the lacquer hadn't peeled on the fretboard, the tuning heads stayed shiny and the pick guard been pearlized, it would've been much better. And I don't like the battery cover set up on the back of the guitar. It's too easy to scratch the back with a screwdriver when you replace the battery. But really, because it's such a dream to play and has such a huge and fluent tone, it's not that big of a deal.

If you want the easiest guitar in the world to play, with a smooth, huge tone, get one of these. One of the guys that did sound for me when I was playing this guitar called it the "Green Machine". I named it "Miss Molly" from the song "Good Golly Miss Molly!" because that's the way I feel playing it!

Fender Eric Clapton Signature Stratocaster
5
I bought this guitar used from a local dealer. I paid $900 which was a bargain considering this guitar was a 50th anniversary as well

this guitar has great sound with the lace sensor active pick ups. They give u a good single coil and you can crank up the mid boost for a great humbucker sound. This guitar stays in tune forever. This guitar has fat clean tone and great distortion.

One of the only things I dislike about this guitar is that it is very heavy and with the mid boost up, the clean tone can get a little blurry when the strings are plucked hard.

the body is alder and the paint job is great. My strat is pewter and the quality is great.

If u want a great sounding guitar that is low maintenance looks great, this guitar is for you. This guitar was worth every penny.

Published on 10/11/10
Fender is organizing a giveaway in which you can win an Eric Clapton Stratocaster guitar as well as the sold-out Clapton Deluxe Limited Edition Bundle.