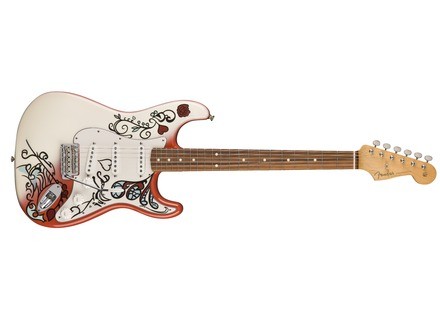 Fender Jimi Hendrix Monterey Stratocaster
5
While i’m not a big Hendrix fan, i’ve always liked the look of this Monterey Strat. When Fender announced this Made-In-Mexico version, my attention was all the more raised that I still didn’t have a strat with a pau ferro fingerboard, due to missing the opportunity to get the first version of the SRV signature model… as a result, I’m now the owner of the very first Monterey Strat available in France.

The shop called me as soon as it had arrived, I went there to give it a test ride and – wow, it sounded very good for a “small” strat and the decoration was rather nicely executed. After reading the specs from the Fender website – neck with a 7.25” radius and vintage slim frets – I really wanted to try it before buying, not buy it online. I’ve had a bad experience that let me know that Fender’s fretwork is not always top level, which is all the more a make-or-break with vintage specs – it’s either well done and you can play bends everywhere without a 3mm-high action, or you’re in for a 160€ visit at your favourite guitar repair shop, so you’d better know what to expect – and what you’re to buy…

This one is flawless in that regard : a 1.5mm action at the 12th fret, the neck is almost straight and you can play 2-tone bends as you want – YES!!!!

This model is very similar to the Classic 60 FSR SJapan Fiesta Red Strat I had bought in 2016 (which was also perfectly crafted). The neck is just as thin. As a result, I’m about to buy the Japanese strat

Please note that a black Fender softcase is included .

Don’t dream though, this ain’t the kind of models that will become valuable collectors as they age. In France only many are to be sold – over 500 about to be shipped or preordered – but it may take a while before being able to try it in a shop.
However, this is a well-finished instrument with a nice yet not too flashy look (compared with my Wayne Kramer strat for example – just saying).

So this guitar is a real pleasure, you recognize a strat’s typical quacky sound and the pau ferro fingerboard is both beautiful and nice to touch.

The model I own offers excellent sustain and the vibrato keeps everything in tune. I made a small video where you can hear its resonance

However, the nut’s slots are a bit too deep for the D and G strings, sot hey tend to get out of the nut if you pull’em too hard. This mostly happened to me when stretching the strings though, not while playing, so there’s no need fot me to plan doing anything about it so far.

If you like it I can only recommend you to try it – but beware, you might very well never leave the shop without it!
Did you find this review helpful?yesno
»