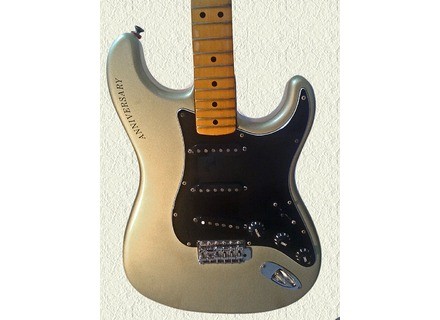 Riffko's review (This content has been automatically translated from French)

The handle is varnished wish and allows all eccentricity.
It's a Start, so Access in acute is pretty easy.
This guitar is very well despite the weight balance consquent, trs heavy it is and play with a harness is far from being redundant.
The sound? the still is a real Stratocaster, Fender it sounds really. The three microphones dlivrent a clear, almost velvety felt. You have to play with potentiomtres to get all the nuances. Good ds snoring that pushes a little saturation, but still sounds the same. The sustain is incredibly long, happiness.

Does this instrument offered me by my aunt in November 1979. It's one of my guitars and Premire I hlas abused over the years. First I pon Anniversary logo and a few years later the silver color of the body to bring up the natural grain of wood. I kept the 2 original pickups and neck meedle and I installed a Seymour Duncan in acute Quarterpound for more PCHE.
This guitar sound on any amp. It's a trs individual approaches of old layers of old, a marvel.

I normment jou on this instrument. The handle is tired us and a full reffrettage required.

T buy this guitar has 4700 francs with the tui. For lpoque c'tait trs expensive and even breaking my piggy bank I could never have acqurir such an instrument. Thank you Godmother.
So difficult to put a notice on the report qualitprix of this guitar.
I dsormais other guitars. This one has become a pice of collection. If you ever find one on the market the opportunity try the crack it's enough.

Channel agrable.Poids above average for a stratum. Usual versatility.