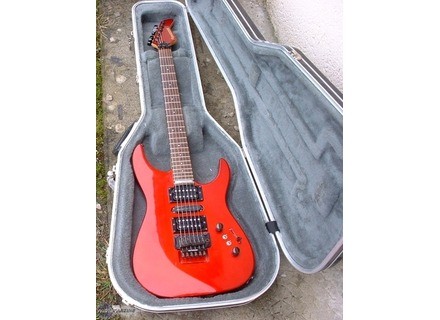 The heel is trs trs end, allowing access to acute without any worries.
The handle end is TRS, which makes a fast game.
The switches are very easy handling, even in plienne song (if you want to move from one saturated with a clear strat-type).
Grace rglages these, one can choose the cblage microphones, which as everyone knows, the sound of change at all! Thus, the possible configurations are (S = Single D = Double):
SSD, SSS, DSS, DSD and DD D. ..
The guitar is more lgre a start!

The bridge is prcis and maintains the accuracy of the instrument, with refining the tuning. Still, buying it not rgl n't properly: the accuracy n't no good and he does a little hard to maneuver ... it took so pass by luthier! they can not do a minimum of rglage factory?? right?? is too much trouble?? pfff ... good to go 9 / 10 when even by what I luthier not take me for cheap! , 0)

This guitar is essentially oriental metal. But thanks to the switches change cblage microphones, it becomes extrment polivalente ... Now there is only a start that has the violin out a Necessary for the home! same thing for a gibson!
BensArt microphones are positioned in two saturation in Wonderland!
Once split becomes crystal-clear sound and allows for clear sound without any saturation from the microphone.

I give that 8 / 10, because I find that exprience with other microphones would donns rsultats better ... like with EMG81, 85 or 89, or Symour Duncan JB and HotRails example. ..

For my part, I have used for 4 years. I bought it new in 1996 5790Fr Clermont Music (63). I tried a lot of the guitar down (studio Gibson, Fender Standard United States, US fly Epiphone, Jackson Kelly, ...) and there's the latter that really sduite because it offered me the perfect compromise between a Fender and a Gibson because of the switches ...
Currently, I do not use more, I just bought several guitars that I use specifically developed to each type of sound. In the end, I win at her and too bad, whether to carry 3 guitars each concert! (A Fender US Plus, a Yamaha FG and Gibson Custum ... it's just to do my wanker!, 0))

In short, a good guitar and a superb report qualitprix!